A woman widely known as Vladimir Putin’s daughter attended Russia’s equivalent of Davos last week — but nobody there acknowledged her family relations for fear of getting in trouble with the Kremlin, The Washington Post reported.

It’s an open secret that Katerina Tikhonova, 34, and her sister Maria Vorontsova are Putin’s daughters with Lyudmila Putin, his first wife, though the Russian leader has never publicly confirmed the two as his children. He’s also rumored to have a third daughter with a longtime girlfriend.

When asked about the identities of his children in the past, Putin has cited safety concerns for why he wants to keep them private. Last August, Putin mentioned that his daughter had taken Russia’s Sputnik V coronavirus vaccine, but did not name her.

The Post reported that many people in Russia dare not publicly acknowledge Putin’s children for fear of going against Kremlin policy.

Nobody mentioned Tikhonova’s connection to Putin, but she was referred to by her first name and patronymic, as Katerina Vladimirovna, which is a nod to her father’s first name, according to The Post. 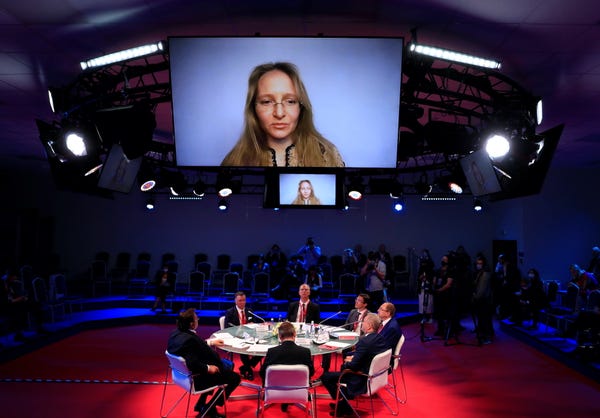 Tikhonova was introduced as the deputy director at the Institute for Mathematical Research of Complex Systems at Moscow State University, and spoke at a session about litigating international investment disputes at the St. Petersburg forum, The Post reported.

She appeared via video link and gave a six-minute speech on increasing investment in “breakthrough technologies,” according to The Post.

Her speech was broadcast above a table where members of Russia’s elite were gathered, The Post reported. They included heads of the country’s top universities, Russia’s justice minister, and the head of the country’s sovereign wealth fund.