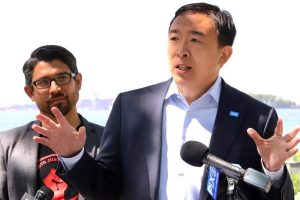 Speaking to reporters from Manhattan’s Battery Park with the Statue of Liberty behind his left shoulder, Yang proposed lowering the city’s voting age to 16 and allowing “non-citizens who are lawful permanent residents” to vote.

When asked how he would implement his plan and whether there would be any issues with the state or federal government, Yang told Insider that the changes should have legal standing locally, but the teens and green-card holders would not be able to vote in state or federal elections.

“So, we’ve looked into it, and it is within city authority to create a classification called ‘municipal voters,'” Yang said. “This is true for both non-citizens and for young people. Now, I would support bills in Albany and bills at the federal level to lower the voting age in the state, or even the country, but we can do this right here in New York by creating a category of municipal voters and then defining who’s eligible.”

Carlos Menchaca, a city councilman from Brooklyn who ran on a progressive platform in the mayoral race before dropping out and endorsing Yang, said the move would also give a voice to immigrant communities and the children of immigrants who often confront city bureaucracy on behalf of their parents.

As a son of Taiwanese immigrants, Yang said “expanding the franchise” to green-card holders is personal to him.

There could be court challenges if such a proposal were to become law, and Yang said he does not know if New York Gov. Andrew Cuomo would be in favor of lowering the voting age to 16.

Lowering the voting age would get younger voters engaged sooner and keep them voting consistently, Yang said. Higher voting participation rates among Americans 65 and older tends to lead to more policies being tailored toward the elderly, leaving young people to feel ignored in the political process, he added.

“Now if you were to have 16-year-olds vote, what would that do? That would transform every high school in New York City into a hotbed of democracy,” Yang said.

The former presidential candidate also hedged against a potential counter-argument that teenagers do not know enough about current events to be trusted with the responsibility of voting.

“If you’ve talked to a 16 or 17-year-old lately, I would push back on that notion,” Yang said. “A lot of them are very savvy. They know what’s going on around them to a very high degree, and they deserve a voice in their city and in their own future.”

A number of other candidates in the race — including Eric Adams, Ray McGuire, Scott Stringer, and Maya Wiley — have come out in favor of allowing green card holders to vote, but not for lowering the voting age.