Another Republican Who Has Promoted QAnon Is Headed to Congress 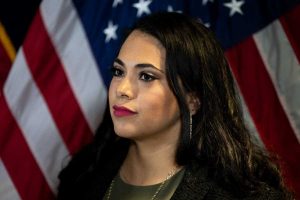 It’s primary season, but there was a special election in Texas on Tuesday in which Republican Mayra Flores defeated Democrat Dan Sanchez to secure a spot in Congress. The result is significant because the state’s 34th District had been blue, with Democrat Filemon Vega retiring this year to force the special election to carry out the remainder of his term. Flores’ victory in South Texas is another sign the party is losing ground with the state’s Hispanic population.

It’s also significant because Flores has promoted the QAnon conspiracy theory, which holds that the United States is run by a cabal of Satan-worshipping pedophiles who would — or still will — be brought to justice by Donald Trump. Media Matters points out that Flores frequently adds “#Q” and “#QAnon” to her social media posts, as well as “#wwg1wga,” shorthand for “Where We Go One, We Go All,” a QAnon slogan.

Surging Pennsylvania Senate Candidate Said She Was Leading Buses to Capitol on Jan. 6 for 'Our 1776 Moment'

'Silence of the Lambs': The Complete Buffalo Bill Story

Chasteness, Soda Pop, and Show Tunes: The Lost Story of the Young Americans and the Choircore Movement

Flores has denied she believes in QAnon, telling the San Antonio Express-News that she’s “always been against any of that.”

Rep. Marjorie Taylor Greene (R-Ga.), the most prominent QAnon supporter currently in Congress, has made similar denials. Her win in 2020 was alarming given the litany of outlandish conspiracy theories she’d pushed in the past, from the idea that 9/11 was staged, to the idea that California wildfires were started deliberately by Jews, to several theories revolving around Democrats and pedophilia. These types of ludicrous, unfounded claims have since worked their way into mainstream conservatism, and it’s no longer shocking for Republican congressional candidates to have pushed any number of unfounded conspiracy theories — including, of course, that the 2020 election was fraudulent.

There’s no evidence Flores has articulated any of these views, but it’s nonetheless concerning that she doesn’t seem to have any problem aligning herself with QAnon. Her decision to do so is another reminder that the conspiracy theory and all of its tendrils aren’t only flourishing on the fringes. QAnon followers are now a core demographic many Republicans feel they need to court as they vie to win a seat in Congress. Flores will still have to win the general election in November to retain the seat beyond the remainder of Vega’s term, but for now, at least, conspiracy theorists can rest easy knowing they have one more ally in Washington.