Home » Politics » At Air Force One base, intruder given up by ‘mouse ears’

At Air Force One base, intruder given up by ‘mouse ears’ 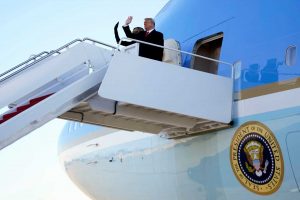 WASHINGTON – In a highly unusual breach of security last month at the air base that operates the Air Force One presidential aircraft, an apparently aimless intruder went undetected for several hours and walked on and off an airplane on the flight line before his quirky headgear gave him away.

He was wearing what an Air Force investigative report released Thursday described as “a bright red or pink cap that partially covered his ears and had distinctive balls on top that looked a little like mouse ears.”

An airman in the operations office at Joint Base Andrews, located in Maryland just outside Washington, saw the man on the flight line and became suspicious, partly because of the headgear, and called security. Officials said he never got close to Air Force One.

“To be frank, I’m just being honest, we had no idea we had an unauthorized civilian on the base. He could have roamed around for a lot longer had it not been for that particular airman that figured out he doesn’t quite fit,” said Sami Said, the Air Force inspector general who briefed reporters on his findings.

The Feb. 4 intrusion was reported the same day by the Air Force, which opened an internal investigation to determine how it happened and what could be done to minimize chances of a repeat. The probe found three main security failings, starting with “human error” by a gate security guard who allowed the man to drive onto the base even though he had no credentials that authorized his access. Hours later, the man walked undetected onto the flight line by slipping through a fence designed to restrict entry. And, finally, he walked onto and off a parked airplane without being challenged, even though he was not wearing a required badge authorizing access to the restricted area.

US President Joe Biden and First Lady Jill Biden step off Air Force One upon arrival at Ellington Field Joint Reserve Base in Houston, Texas on February 26, 2021. Biden is visiting Houston, Texas following severe winter storms which left much of the state without electricity for days. (Photo: Mandel Ngan, AFP via Getty Images)

The day of the incident, the officials said the intruder was turned over to local law enforcement because there was at least one outstanding warrant for his arrest. His name has not been released. The inspector general’s report said he had “an extensive arrest record,” but further details were blacked out.

“Security forces actually never saw him transition from the open gate to the aircraft,” said Said, the inspector general. Aside from his odd hat, the intruder’s clothing — dark pants and jacket and black high-top sneakers — could have made him appear to be a contractor, Said said, although he should have been challenged anyway, not least because he had no visible badge authorizing his presence.

“The good news is, once alerted, security forces apprehended him pretty darned quickly — the minute he came off the plane,” he said.

Said said the modified Boeing 747 that serves as Air Force One for presidential travel was never at risk and that it is kept behind more layers of protection at Andrews. “That area is exceptionally secure,” he said.

Unimpeded, the unarmed intruder got aboard a C-40, a transport jet primarily used by members of the Cabinet, Congress and military combatant commanders. He did no harm and the Air Force investigation report, which was heavily censored by the Air Force before it was released Thursday, concluded that he had no plan to cause harm to Air Force personnel or equipment. His purpose could not be definitively determined.

“The evidence supports the conclusion that (blank) was simply wandering around the base and did not enter the base to meet anyone,” the report said. “During questioning, (blank) said he came on base because he wanted to see airplanes.”

After driving through the Virginia Gate at Andrews, the man drove to the base exchange, where surveillance camera footage later showed he spent about an hour before returning to his car. His whereabouts for the next four hours could not be determined. Personnel at the 89th Air Wing passenger terminal recalled him entering the terminal, and he then slipped unnoticed onto the flight line through an 18-inch gap in a security fence gate that was not fully closed because of a “malfunction.”

He walked onto the C-40 aircraft, which was open to facilitate a communications training session. Two aircrew members were aboard. The intruder walked to the back of the plane and left unchallenged after a few minutes. As he walked back toward the security gate on the flight line he was stopped and arrested.

Said said that to his knowledge Andrews had never before experienced such a lapse in security.

Who pays for the use of Air Force One? John Fritze reports on how it gets murky with trips for both political rallies and White House policy events.