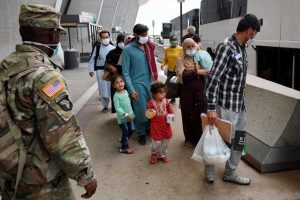 The Biden administration admitted 11,411 refugees to the U.S. in fiscal year 2021, falling far short of the president's refugee admissions cap of 62,500 for that year.

The new number of admitted refugees, released by the State Department this week, is about a fifth of the cap for the fiscal year that ended on Sept. 30, and is the lowest number of people admitted through the Refugee Act since it passed in 1980.

It comes as the administration works to reverse the hardline policies set by former President Donald Trump, who curtailed the number of refugees allowed to come to the U.S. and placed limitations on who is eligible. In addition, the coronavirus pandemic has complicated the administration's process of admitting refugees.

President Joe Biden established a new cap in May after facing pressure from Democratic lawmakers and immigration advocates to quickly increase the meager 15,000 refugee ceiling that Trump put in place before leaving office.

Ned Price, the State Department spokesman, said in a statement last month that the president has sent Congress a report detailing his intention to raise the refugee cap for the first full fiscal year of his presidency.

"A robust refugee admissions program is critical to U.S. foreign policy interests and national security objectives, and is a reflection of core American values," Price said in the statement. By law, presidents must consult with Congress before determining how many refugees should be allowed each fiscal year.

Biden conceded in May that the caps are unlikely to be reached, citing work to undo "the damage of the last four years" under Trump.

During fiscal year 2017, when Trump took office, the State Department reported only 53,716 refugees admitted into the U.S. This is a decline from the 84,994 refugees admitted during the previous fiscal year under former President Barack Obama, who set the refugee ceiling for that year to 85,000.

The low number of refugee admissions under the Trump administration has also gutted the U.S. resettlement infrastructure, with several agencies shutting down their offices. According to a report by the Penn Biden Center from last year, about a third of local resettlement offices across the country closed or suspended operations as of April 2019.

"We are saddened but unsurprised by the record-low admission figures for this fiscal year," O'Mara Vignarajah said in the statement. "It speaks to the lasting damage of the Trump administration's four-year assault on the refugee program."

She noted that the global pandemic has also hindered refugee resettlement efforts. For example, the State Department said the pandemic prevented officers from conducting in-person interviews abroad with refugees hoping to come to the U.S., the Associated Press reported Monday.

"Rebuilding the program from the rubble has further been complicated by the pandemic, which has largely prevented the federal government from processing a robust pipeline of refugee arrivals," O'Mara Vignarajah said.

Bill Frelick, the director of the Refugee and Migrant Rights Division of the Human Rights Watch, said in a statement that the Trump administration "decimated the refugee settlement infrastructure."

"The Biden administration could not be expected to rebuild it in a day," Frelick said in a statement Thursday.

However, he still expressed disappointment with the low refugee admissions.

"More than 51,000 places that could have been used to save lives and restore hope were lost forever," Frelick said in the statement. "This is not simply about numbers. These are people whose lives are on the line."