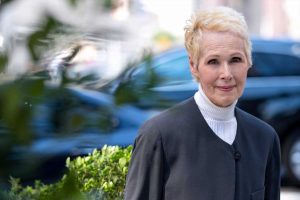 WASHINGTON – The Biden administration Justice Department is seeking to defend former President Donald Trump in a defamation lawsuit brought by a former columnist who accused Trump of raping her more than 20 years ago.

Justice Department attorneys argued in a court brief filed Monday night that Trump acted in his official capacity when he said E. Jean Carroll lied about being raped to boost the sales of her memoir.

“Speaking to the public and the press on matters of public concern is undoubtedly part of an elected official’s job. Courts have thus consistently and repeatedly held that allegedly defamatory statements made in that context are within the scope of elected officials’ employment – including when statements were prompted by press inquiries about the official’s private life,” attorneys wrote.

The move to defend the former president in a lawsuit arising from his comments about an alleged incident in his private life means taxpayers could foot the bill if Carroll is awarded damages. It also could be seen as a departure from Biden’s remarks before taking office. During the campaign, Biden has accused Trump of using the Justice Department to advance his personal and political interests.

Spokesman Andrew Bates said the White House was not consulted by the Justice Department “on the decision to file this brief or its contents.”

“And while we are not going to comment on this ongoing litigation, the American people know well that President Biden and his team have utterly different standards from their predecessors for what qualify as acceptable statements,” Bates said.

The Justice Department did not immediately respond to a request for comment.

Carroll, a former Elle magazine writer, has accused Trump of raping her at Bergdorf Goodman, a luxury New York City department store, in the mid-1990s. She went public with her allegation in 2019 before the release of her memoir that detailed the alleged assault.

Trump, in response to Carroll’s claims, said she wasn’t his type, and the memoir “should be sold in the fiction section.” Carroll later sued Trump for defamation in New York state court, arguing the former president not only lied about raping her, but also smeared her character in the national press.

Former President Donald Trump was banned from Facebook after his comments on the Capitol riots in January. (Photo: Getty)

After a state judge rejected Trump’s claims of immunity, the Justice Department under his administration sought to defend the former president, which would move the case to federal court, with the U.S. replacing Trump as the defendant.

The move, which came as former Attorney General William Barr was facing allegations that he’s using the Justice Department to defend and protect Trump, was seen as an effort to shield the former president from potentially damaging legal action in the midst of a reelection campaign.

U.S. District Judge Lewis Kaplan in October blocked the effort to intervene, rejecting the government’s argument that Trump was acting in his official capacity when he disparaged Carroll.

“The undisputed facts demonstrate that President Trump was not acting in furtherance of any duties owed to any arguable employer when he made the statements at issue … To conclude otherwise would require the Court to adopt a view that virtually everything the president does is within the public interest by virtue of his office,” Kaplan wrote in his ruling.

Appealing the ruling, the Justice Department said Kaplan’s reasoning was “erroneous” and argued that the Westfall Act, which allows state law tort claims against federal employees to be moved to federal court – with the U.S. as the defendant – applies to Trump.

Instead, the case represents questions “that implicate the institutional interests of the federal government,” attorneys argued. The Westfall Act applies broadly to all federal employees and “nothing in the text, purpose, or history of the statutes suggests that they exempt from their coverage the President of the United States.”

Nineteen women, including Carroll, have accused Trump of sexual misconduct.

The case is one of several lawsuits and investigations facing Trump. Former “Apprentice” contestant Summer Zervos, who accused Trump of kissing and groping him on multiple occasions a decade earlier, filed a similar defamation lawsuit in New York.