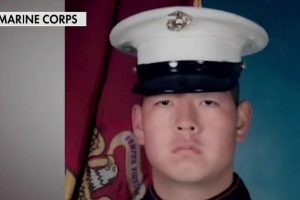 Eric Shawn: A US Marine could be killed by Kim Jong Un, warn supporters

A former U.S. Marine who is an activist in a group advocating freedom for North Korea could be killed by Kim Jong Un if the Biden administration continues to press its extradition case against him, warn supporters.

“Christopher Ahn is in danger of being assassinated in broad daylight for the world to see, to make the point that North Korea will indeed go to the ends of the earth to kill a priority target like Christopher Ahn,” said Sung-Yoon Lee, the Kim Koo-Korea Foundation professor in Korean Studies and assistant professor at the Fletcher School of Law and Diplomacy at Tufts University.

“Another possibility is Ahn could be abducted, taken to North Korea, tortured extensively and then executed in public,” he told Fox News. “North Korea is a terrorist state with a global murderous reach, with vast resources for implementing, executing its assassination job against high-value targets like Christopher.”

Ahn faces an extradition hearing in Los Angeles today at U.S. District Court, a process his supporters demand the Department of Justice stop by dropping its extradition effort.  He is charged in Spain with breaking into the North Korean embassy in Madrid in 2019, part of what is claimed to have been an operation to help the North Korean ambassador to Spain escape and defect.

If the U.S. hands the former leatherneck over to Spanish authorities, “North Korea will go to the ends of the earth to find him, to harm him, to assassinate him,” said Lee.

The federal judge in Ahn’s case seemed to agree that he would be in danger if the Justice Department put him on a plane to Madrid.

“The FBI has confirmed that the North Korean government has threatened his life,” U.S. Magistrate Jean Rosenbluth wrote in 2019. ” … He is apparently the target of a dictatorship’s efforts to murder him.”

The 39-year-old Ahn, who spent six years in the military and served in the Iraq war, was arrested in 2019 as a member of the group Free Joseon. The group, whose name means “Free North Korea,” opposes the Kim regime and has helped several high-level North Koreans defect.

Spanish authorities claim that Ahn and the small group of activists broke into the North Korean embassy in Madrid before tying up and beating some of the diplomats. Those claims were the basis for Spain seeking the men’s return. But Ahn’s supporters say the activists were invited into the building as part of an agreed-upon plan to help Kim’s ambassador flee. The activists say they spent hours inside with no problems. Videos viewed by Fox News show the activists calmly walking into the embassy, and one sitting in an office having a quiet chat with a member of Kim’s diplomatic corps. One unidentified activist takes the official photographs of Kim Jong Un and his father, Kim Jong Il, from the wall and smashes the portraits on the floor.

The operation was interrupted when Spanish police were alerted.

“The extradition papers from Spain confirm that almost the entire case against Mr. Ahn is based on uncorroborated statements made by high-ranking North Korean officials,” Ahn’s attorney Naeun Rim previously told Fox News. “The statements made by these officials are not credible. For example, they contain many inconsistencies as to who was allegedly tied up and how everyone supposedly got free … There are no medical records to corroborate the injuries the officials supposedly suffered.  We plan to vigorously contest the extradition hearing and show that the case against Chris is not supported by competent evidence.”

“This is the first-ever instance of the United States government executing an arrest warrant issued by another state, albeit a friendly ally, Span, but a case that is almost entirely based on North Korean testimonies. What’s wrong with that? Well, we know that the North Korean state lies for a living. It is a state founded on terror, both internal and external terror, but also a cult of personality,” said Lee.

Ahn is supported by the parents of Otto Warmbier, Cindy and Fred Warmbier. They traveled from their home in Ohio to Los Angeles and are expected to attend the court hearing, to show their public support for Ahn.

Otto was a 22-year-old University of Virginia student on an educational program when he was falsely arrested by Kim’s regime, tortured and sent home to die in 2017. The Warmbiers have since been outspoken critics of North Korea’s human rights record.

When Ahn returned to the United States, his lawyers say he and his fellow activists gave the FBI computer thumb drives, computer discs and other sensitive material that they had taken from the North Korean offices.

But instead of being thanked by the Trump administration Department of Justice, they were charged and now Ahn faces extradition.

“He [Ahn] seemingly has more reason to fear assassination or other harm from North Korea should he be returned to Spain,” the judge said.

The U.S. Department of Justice did not provide a statement to Fox News about Ahn’s case and whether prosecutors would consider blocking Spain’s extradition request.