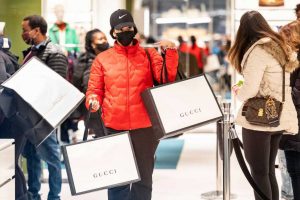 Strong consumer demand sparked a wave of CEO optimism about the economy over the next six months, the Business Roundtable said Wednesday, as it revealed the results of its most recent survey.

But the lobbying group, whose members are CEOs of major American companies, cautioned that the survey was completed before the emergence of the new omicron Covid variant, and that the survey measured only the executives' plans for the next six months.

The Business Roundtable released its fourth quarter CEO Economic Outlook Survey, revealing its headline index had risen to its highest level in the 20-year history of the survey, hitting a value of 124, which is up 10 points from the third quarter.

On top of that, CEOs reported their plans for hiring increased 13 points, plans for capital investment increased 7 points and expectations for sales increased 9 points. The group cited the release of enormous pent-up consumer demand as a driver of the optimism in corporate boardrooms.

"This quarter's survey reflects the encouraging signs we're seeing with the economic rebound as consumers begin to resume travel and spending," said Business Roundtable Chairman Doug McMillon, the CEO of Walmart. "Continued progress in defeating the pandemic, including new variants, will be necessary to sustain strong growth into the second half of 2022."

Business Roundtable CEO Josh Bolten spotlighted recent legislation on Capitol Hill as one of the reasons for the executives' economic optimism.

"The recent bipartisan Infrastructure Investment and Jobs Act, which directs much-needed resources to upgrade our nation's physical infrastructure and broadband connectivity, is an important investment in the long-term health of the economy," he said. "As the economy reverts to a normal cadence, sound economic policy can help sustain strong growth over the long term."

The survey was conducted between Nov. 3 and Nov. 22. The World Health Organization labeled omicron a "variant of concern" on Nov. 26.