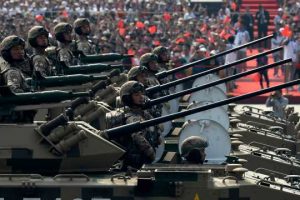 “We will boost military training and preparedness across the board, make overall plans for responding to security risks in all areas and for all situations, and enhance the military’s strategic capacity to protect the sovereignty, security and development interests of our country,” Li Keqiang said Friday, reported Bloomberg.

The budgetary announcement comes as China is conducting a massive military modernization plan, highlighted by the U.S. Department of Defense in September 2020.

In response to China’s increasing investments in their military, Republicans on the House Armed Services Committee wrote a letter to Biden requesting he increase next year’s defense budget by three to five percent.

“The Chinese Communist Party increased its defense spending by over 75 percent in the last decade,” the letter continued. Adding, “If we do nothing, over the next decade, China will fully modernize its military, potentially bringing it into parity with our own.”

The White House did not immediately respond to Fox News’ request for comment on China’s increased military investments.

China has escalated its pressure in the South China Sea with an active military presence, along with their continued building of military outposts on artificial islands in disputed waters.

In response to China’s contested presence in the region, the U.S. has increased its naval presence and launched freedom of navigation operations (FONOP) to ensure free and open access to the international waters.

Congress approved a defense spending budget of $694.6 billion for the 2021 fiscal year — more than three times the budget China has set aside for its military spending.