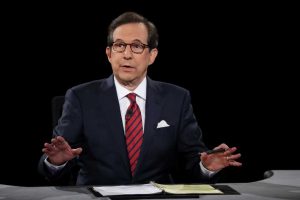 Chris Wallace, one of the few remaining reasonable people at Fox News, announced he is leaving the network.

“After 18 years, this is my final Fox News Sunday,” the anchor said at the end of his show on Sunday. Wallace explained that he is leaving because he is “ready for a new adventure” outside of politics. “I have decided to leave Fox,” the anchor said. “I want to try something new, to go beyond politics to all the things I’m interested in.”

Wallace was a rare voice at Fox, often holding even his Republican guests to account. He has called out their hypocrisy, pushed back on Trump lackeys like Stephen Miller, disagreed with some of his more conservative colleagues on air, and even laughed at some of former President Donald Trump’s more absurd claims. That said, he would also equivocate and give a platform to some of the worst of the Trump administration.

Wallace said that at the network he has been “free to report to the best of my ability, to cover the stories I think are important, to hold our country’s leaders to account. It’s been a great ride.”

In a statement, the network addressed Wallace’s departure: “We are extremely proud of our journalism and the stellar team that Chris Wallace was a part of for 18 years. The legacy of Fox News Sunday will continue with our star journalists, many of whom will rotate in the position until a permanent host is named.”

According to CNN’s Brian Stelter, Wallace signed a four-year contract with the network in 2017. “His contract was expiring this year, and he decided to leave,” Stelter tweeted.