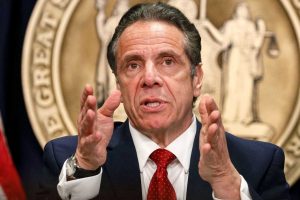 New York Gov. Andrew Cuomo's close allies and advisors are split on whether he should resign or fight a wave of sexual harassment accusations.

Although Cuomo did not signal that he would resign, Jacobs said, he believes the governor will do so for the betterment of the state.

An independent report commissioned by state Attorney General Letitia James said Cuomo violated state and federal laws by sexually harassing at least 11 women, including a state trooper, and retaliated against one accuser. President Joe Biden and other top Democratic Party officials, such as Senate Majority Leader Chuck Schumer, D-N.Y., have called on Cuomo to resign.

Prosecutors across New York, including the Manhattan district attorney, have asked for evidence from the investigation. Lawmakers in Albany said Thursday their impeachment probe into the governor's alleged actions was nearing an end.

Still, several Cuomo associates and advisors are privately urging the embattled governor to fight on, according to multiple people briefed on the matter. Many of these people have worked with or have known Cuomo for well over a decade and have remained loyal to him through several scandals.

These people described recent conversations with Cuomo and his aides on condition of anonymity in order to speak freely.

A Cuomo spokesman did not return a request for comment. The governor has rejected the allegations.

"Everything I have heard, up to about 2 [Wednesday] afternoon, was he planned to fight through," said a longtime Cuomo ally who has been in touch with the governor's closest advisors.

Another person, who spoke with a Cuomo advisor Wednesday at a New York Yankees game, said the aide conveyed that the governor plans to fight the allegations.

A longtime business ally of the governor said there is a growing group of people trying to persuade him to remain in office.

A Marist poll taken after the attorney general's report was released shows that 63% of registered voters in New York believe Cuomo should resign.

The three-term governor is up for reelection next year.