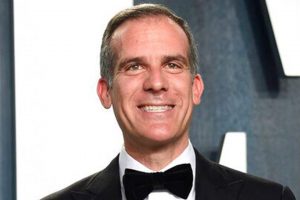 Democratic Los Angeles mayor Eric Garcetti was greeted by a chorus of boos on Friday while attending the Los Angeles Dodgers’ first home game of the 2021 season.

Garcetti was on hand for the ceremony commemorating the Dodgers’ victory in the World Series last fall. When the mayor was introduced as the team prepared to raise its championship banner at Dodger Stadium, fans responded with jeers.

FOX LA reporter Bill Melugin noted that Garcetti got “booed bigtime” despite the limited number of fans in attendance. One Twitter user quipped that fans “would have cheered if he took [the] mic and resigned.”

The Dodgers were expected to have roughly 14,000 fans in attendance for their home opener. That figure amounts to roughly 24% of capacity at Dodger Stadium.

While current guidelines allow larger venues to operate at 33% capacity, the Dodgers were expected to allow slightly fewer fans in order to comply with social distancing guidelines.

Garcetti and embattled Democratic California Gov. Gavin Newsom have faced widespread scrutiny over their handling of the coronavirus pandemic. Critics have argued that some of the strict guidelines enacted during the pandemic were ineffective and hurt local businesses.

Garcetti isn’t the only politician who has contended with rowdy fans in recent days. Democratic Illinois Gov. JB Pritzker and Chicago Mayor Lori Lightfoot were booed while taking the field at the Chicago White Sox home opener on Thursday night.