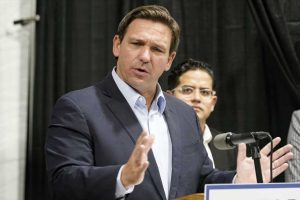 Governor Ron DeSantis is continuing his battle against preventing Covid-19, this time by filing an emergency motion to stop school masking requirements from going into effect. A judge on Wednesday overturned the governor’s statewide ban on school mask requirements, ruling that districts could indeed attempt to protect students and their households by mandating masks.

DeSantis, a pioneer of pro-Covid policies who banned school mask requirements via executive order back in August, is asking the court to reinstate the stay via an emergency repeal. The court has given plaintiffs in the case — parents of Florida schoolchildren — until 8 p.m. on Thursday to respond. So far, 13 school districts in the state have implemented mask requirements in defiance of DeSantis’s order, only allowing parents to opt their children out for approved medical reasons.

The 30 Sexiest Music Videos of All Time

Leon County Circuit Judge John C. Cooper’s ruling this week follows a decision he issued on September 2nd that found DeSantis acted outside his constitutional authority when he banned mask mandates in Florida schools. DeSantis justified his actions by claiming he was acting under authority granted by the Parents’ Bill of Rights, a controversial piece of legislation Florida passed in 2021 that gives parents control over certain aspects of their children’s education, upbringing, and health care.

But Cooper said that even the Parents’ Bill of Rights provides exemptions for narrow government actions that protect public health, such as masking. And this week, he reiterated the importance of wearing masks to prevent the spread of Covid-19.

“We are not in normal times. We are in a pandemic,” the judge said Wednesday, according to NBC Miami. Cooper also noted that some children are too young to be “protected by vaccination,” as the Food and Drug Administration has only approved the vaccine for people age 12 and up.

“Children are at risk and they provide at least some protection by masking,” Cooper said, adding that, despite DeSantis’s claims that masks are harmful, the “greater weight of the evidence did not support the claim that mandatory face masks… would create any meaningful harm to those wearing it.”

In DeSantis’s emergency motion, his attorneys argue that by issuing a ruling about masking in schools, Cooper violated the state’s separation of powers and “ignore[d] long-standing constitutional and statutory authority vested in the governor, the Board of Education, and the Department of Health.”

But as an attorney for the parents stated in court, according to NBC Miami, if Cooper sides with DeSantis, it “would mean more sick and dead children,” whereas siding with the parents “would save lives.”

According to data from the American Academy of Pediatrics, as of September 2nd, children represent more than 15 percent of all Covid cases. That amounts to more than five million children infected with Covid since states started reporting data. And since kids started returning to school in late August, more than 450,000 cases have been detected in children, a 10 percent increase in the cumulated number of child Covid-19 cases since the beginning of the pandemic.

The CDC reports a 7-day average of 13,386 Floridians are hospitalized with Covid, a total that, by any sane metric, constitutes an actual public health emergency.