Home » Don’t overreact to the N-word. Banishing it won’t end racism. We have real work to do.

Don’t overreact to the N-word. Banishing it won’t end racism. We have real work to do. 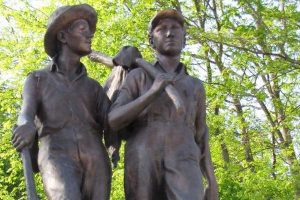 On more than one occasion I’ve used the “N-word” in public, when speaking to a group of strangers. Each time, I was standing in a federal court addressing a jury and quoting a defendant’s own words at his trial. While I always warned the jury at the outset of the trial that I would be repeating direct quotations that included offensive words, I never worried doing so would jeopardize my job or brand me a racist.

This is how things worked when I was a federal prosecutor. Because no one with a lick of common sense would think that quoting a racial epithet in this context meant I advocated the bigotry that word carries when it is launched as an insult from a passing car at an African American walking home from the grocery store.

When used as an insult directed at someone, the N-word is reprehensible. It isn’t just a slur; it conjures a shameful time in American history when it was intertwined with violence and legal discrimination designed to keep an entire race down. But there is a difference between using the word as a slur and repeating it as a quotation, using it as a historical reference or including it in the arts.

Unfortunately, over the past several decades, nuance has been replaced with sledgehammer politics. And on issues of race, common sense has often been replaced by an insanity that has its genesis in the guilt many white Americans feel for the unforgivable horrors perpetrated by other white Americans against African Americans. Human slavery, lynching, a Constitution that referred to slaves as three-fifths of a person and segregation enforced by Jim Crow laws come to mind.

At the risk of perpetuating a cliché, as a Jew, feeling guilty is in my blood. That said, I find it difficult to feel guilt for something over which I had no control. I can recognize the immorality of others’ actions, condemn their occurrence and work to compensate for an unfairness that gave people with one skin color an ongoing advantage over people with a different skin color. But misplaced guilt felt by many white Americans has spurred them to irrationality in an effort to absolve themselves of a sin they did not commit.

A top aide to a Washington, D.C., mayor was forced to resign after using the word “niggardly” when describing how to manage a budget. The word means stingy, and it has no racial overtone. That was 1999, and it was a precursor to the “woke” movement that now hunts and destroys anyone who makes a comment that can be blow-dried and teased into a perceived racial slur, even though it was not the intention behind the statement.

Monuments to lynching victims across the United States at the National Memorial for Peace and Justice in Montgomery, Ala., on April 23, 2018. (Photo: Albert Cesare, Montgomery Advertiser-USA TODAY)

Last month, a Houston high school English teacher was placed on administrative leave after announcing a writing assignment that asked students to consider how one word can have a dramatically different meaning and effect depending on the background and intention of the user. Instead of using the “N-word,” the teacher used the real word – because the assignment related to a specific word and not its neutered stand-in.

Despite the teachable context, all hell broke loose. In a local TV news story, student Karina Rodgerson reacted with: “It was just really shocking … it was there on the board,” as though the chalked word ran the risk of coming to life, leaping from the blackboard and performing a lynching in class.

Recently, during a professor’s virtual office hours, a Rutgers Law School student quoted from a 1993 case in which the N-word was included as part of the legal opinion. What followed were angry accusations, petitions to ban use of the word (even in quotations from published legal decisions), a “racial healing session” and a series of agonizing apologies.

And last year, the chair of Central Michigan University’s Journalism Department was fired for reading a direct quotation from a published court case in which part of the evidence of the case was a statement that included the N-word.

I’m not going to argue that because some Black people refer to others with the N-word that it’s OK for everyone to use it in all circumstances. I get that minorities can affectionately call one another a name that legitimately draws condemnation when used by someone outside the circle. I’ve often thought that’s how they take the sting out of the insult – by repurposing it with a different meaning.

Still, some measure of rationality must apply. The reason one Black person can call another Black person the N-word is because the intention behind the word is not hurtful. We should apply the same reasoning when someone who is not Black uses the word. Words should not be more powerful than the intention of the person speaking them.

Current American sensitivities limit teaching of Mark Twain’s masterpiece “The Adventures of Huckleberry Finn.” It is often excluded from classrooms and libraries because the non-euphemized version of the N-word appears over 200 times in the text as a historically accurate epithet used in the mid-19th century South.

Even if we were willing to ban “Huckleberry Finn,” “To Kill a Mockingbird,” “Of Mice and Men” and other treasured pieces of classic literature because they include the N-word, what about modern literature, plays and movies that depict slavery or racial bigotry? Must they be sanitized of the language that exposes the brutality of racism, or risk boycotts that silence a call for racial justice because the sound of the cry is not pretty?

The crusade to blast the N-word out of literature, music, legal opinions, newspapers, public discussion and off the face of the planet is a misplaced effort to undo years of systemic racism. It won’t work. And there is a danger in whitewashing the vestiges of colonial racism so we no longer feel the discomfort that comes with an unvarnished view. It is the uneasiness – the recognition of what was, what lingers and what could be again – that keeps us vigilant and helps us avoid repeating our mistakes.

Use language that conveys the pain

Don’t tell me: “You’re not Black, so sit this conversation out.” I won’t. When social norms are set exclusively by those in the echo chamber, they lose their tether to rational thinking. Something is not objectively offensive just because it offends someone. And demanding that we all cow our behavior to the most hypersensitive among us leaves people fearful that they will unintentionally cross a blurred line – and resentful that they must agonize over every word to avoid being pushed down the “Racists Only” trap door.

I recently binge-watched Netflix’s “Grace and Frankie.” There is an episode that focuses on anti-gay protests at a gay community theater. The protesters carry signs that refer to “fags,” and the protest leader uses a far more graphic slur to insult one of the main characters.

Racism in America: On Brown v. Board anniversary, white Americans must still wrestle with legacy of racism

Being a “G” in the LGBT acronym, I momentarily considered being outraged. But after a second’s reflection, I realized that the writers, producers and actors are not homophobes. Instead, they were commendably spotlighting anti-gay discrimination in a real way – a way that made viewers understand the pain it brings.

When I pitched this column to my editor, I told her I wanted to use the actual N-word rather than a made-up word that was designed to invoke the real word in a prettier package. She replied with a hard “no.” That probably saved me from public cancellation.

But it should not be this way. Exterminating a single word will not reduce the real threat to the Black community that comes from voter suppression laws, police misconduct and a rising white supremacy movement. Let’s ditch the hysteria over a word and work for real change.

Michael J. Stern, a member of USA TODAY’s Board of Contributors, was a federal prosecutor for 25 years in Detroit and Los Angeles. Follow him on Twitter:  @MichaelJStern1