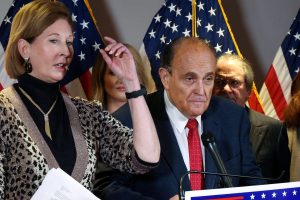 Sidney Powell, former President Donald Trump’s ex-attorney, told the audience at a QAnon conference on Saturday that President Joe Biden should be removed from office and Trump should be “reinstated” as president.

Powell, who’s filed dozens of unsuccessful lawsuits attempting to overturn 2020 election results, falsely told the crowd that Trump could still be inaugurated, but he wouldn’t get credit for “time lost.”

“He can simply be reinstated,” she said, eliciting cheers from the Dallas crowd.

“A new inauguration day is set and Biden is told to move out of the White House. And President Trump should be moved back in. I’m sure there’s not going to be credit for time lost, unfortunately, because the Constitution sets the date for inauguration, but he should definitely get the remainder of his term and make the most of it.”

Powell, a longtime promoter of the QAnon conspiracy theory, wore a leather biker vest adorned with political and religious patches, including one that read “MAGA” and another with, “No God No Peace Know God Know Peace.” Dominion Voting Systems filed a $1.3 billion defamation lawsuit against Powell earlier this year, accusing her of helping push “a viral disinformation campaign” that spread dangerous lies about the election and the company.