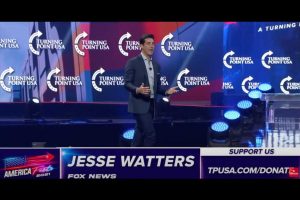 Dr. Anthony Fauci said Fox News host Jesse Watters should be “fired on the spot” for telling a crowd that they should “ambush” the nation’s leading infectious disease doctor. But Fauci said it was unlikely Watters would be punished by Fox News. “He’s gonna go, very likely, unaccountable,” he said. “I mean, whatever network he’s on is not going to do anything for him.”

Watters made the comments at Turning Point USA’s AmericaFest on Monday, encouraging attendees to confront Fauci in public by sharing a conspiracy theory that the doctor funded “dangerous research” in a Wuhan lab that led to the coronavirus outbreak. (The virus’s exact origins are still unknown.)

Watters told college students in the crowd that he was going to “deputize” them to be “little James O’Keefes,” referring to the Project Veritas founder and activist who uses hidden cameras and deceptive editing to film “gotcha” videos in an attempt to “expose” mainstream media outlets and progressive groups as frauds. And he used a violent metaphor to get his point across.

“All right, let’s just say Fauci comes to town,” Watters said. “You gotta ambush a guy like Fauci, OK?” The host then told the audience to ask Fauci questions about funding research at the Wuhan lab.

“You have to be respectful,” Watters said, adding, “First you identify yourself… ‘Do you mind, Dr. Fauci, if I ask you a few questions’ … Then you hit him with the first question.”

Later, Watters said, “You have the goods because he’s been able to dodge and weave on ABC and NBC. No one’s ever hit him in the face like this. Not even Rand Paul has been able to get in his face and point with the grant in his face, so then he’s in trouble. Now you go in for the kill shot. The kill shot? With an ambush? Deadly. Because he doesn’t see it coming. This is when you say, ‘Dr. Fauci, you funded risky research at a sloppy Chinese lab, the same lab that sprung this pandemic on the world. You know why people don’t trust you, don’t you?’ Boom! He is dead. He is dead. He’s done. Now you do that — 30 seconds, it’s all you need. Now you get that footage to us, you get it to Fox.”

Watters continued, “Now you get that footage to us, you get it to Fox… Imagine Tucker Carlson teases that.” He added, “Give us that. That’s what we want. That changes the whole conversation to the country. I’ve authorized it. Just make sure it’s legal.”

Fauci on Tuesday said he was confused by why he has been vilified by the right. “The only thing that I have ever done throughout these two years is to encourage people to practice good public health practices — to get vaccinated, to be careful in public settings, to wear a mask,” Fauci told CNN’s John Berman early Tuesday. “And for that, you have some guy out there saying that people should be giving me a ‘kill shot,’ to ‘ambush’ me? I mean, what kind of craziness is there in society these days?”

“The guy should be fired on the spot,” the doctor added.

In late November, Lara Logan, a host on the network’s streaming platform Fox Nation, compared Fauci to Josef Mengele, the Nazi doctor who performed inhumane experiments on the prisoners at Auschwitz. At the time, Fauci said he was “astounded” by the network’s silence on the matter.