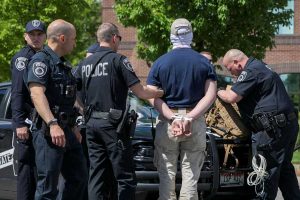 When Coeur d’Alene police slapped the cuffs on members of the white nationalist group Patriot Front at a Pride event this month, the 31 fresh-faced fascists had little clue that FBI agents in the region had been keeping an eye on the group’s activities in Idaho for at least a year.

New documents show how Idaho cops and FBI agents were tracking white nationalists from Patriot Front months before the group was arrested this month for allegedly conspiring to attack a local LGBT Pride event in Coeur d’Alene.

Emails obtained through records requests by Property of the People, a Washington, DC-based transparency nonprofit, demonstrate that FBI agents in the area both reported and were updated on Patriot Front-related acts of vandalism as far back as August 2021. Those agents also helped Coeur d’Alene police prepare for Patriot Front’s alleged conspiracy to riot at a June Pride event, when local law enforcement arrested 31 members of the group.

As a Child, Hal Baddie's 'Doll Activities' Were Hidden. Now, She's Using Them to Take Over TikTok

With Roe Falling, LGBTQ Families Fear They'll Be the Supreme Court's Next Target

Meet the Beatle: A Guide to Ringo Starr's Solo Career in 20 Songs

The documents also show how conservatives’ Qanon-style rhetoric casting LGBT people as “groomers” and “pedophiles” has animated the far-right and shaped its targeting. Emails from city and law enforcement officials show threats against Coeur d’Alene’s LGBT groups came from a wider array of far-right groups than just Patriot Front.

Patriot Front was formed by founder Thomas Rousseau amidst from the infighting following the infamous 2017 Unite the Right rally in Charlottesville, VA, where a white nationalist murdered counter-protestor Heather Heyer. Since then, an Anti-Defamation League primer says, “Patriot Front has been responsible for the vast majority of white supremacist propaganda distributed in the United States.”

Over the past two years, the group gained notoriety through a series of alternately menacing and clumsy flash marches in cities around the U.S., where members of the group wear matching outfits and travel in U-Haul storage vehicles while bearing homemade melee gear and masks to conceal their identities.

That’s what Rousseau had allegedly planned to do on June 11 during a North Idaho Pride Alliance (NIPA) when police there arrested him and 30 other members of the group for conspiracy to riot after an anonymous tipster warned the group had assembled “a little army.”

For at least a year before the arrests, FBI agents in the area were aware of the Patriot Front’s activities in Coeur d’Alene, according to emails from city officials and law enforcement.

In August of 2021, residents of the Coeur d’Alene metropolitan area began complaining about the appearance of Patriot Front propaganda posters around the city, prompting Coeur d’Alene Mayor Steve Widmyer to ask police to investigate.

“We need to catch these people. Disgusting,” Widmyer wrote in one August 2021 email.

The FBI had warned local police about the activity before. In a list of Patriot Front-related vandalism incidents, local police noted that the FBI had reported “two males” who they “reported walking up and down 4th St putting propaganda stickers on light poles that read ‘for the nation against the state,’” alongside Patriot Front’s website address. The feds were “Unable to locate the individuals involved,” according to call notes associated with the incident.

Also in that summer of 2021, Idaho police warned an FBI senior resident agent in an email that the city had recently been “papered with a number of large Patriot Front posters that advertises the website” for the group.

Neither the FBI nor Coeur d’Alene police immediately responded to questions from Rolling Stone.

When local police began tracking threats to NIPA’s planned Pride month events for June 11 of this year, the FBI also pitched in to help.

“At this point we are working with the local FBI here as well as our surrounding agencies to develop a plan for the CDA June 11th event,” a specialist from the Coeur d’Alene police’s crime analysis and intervention unit wrote in response to reports of far-right threats to the group.

Threats to NIPA’s event came not just from Patriot Front, as the arrests suggest, but a handful of far-right groups in the weeks leading up to June 2022. In April, a local Proud Boys chapter circulated calls from far-right activists that “groomers” would be gathering in a park in Coeur d’Alene for Pride Month. Multiplied in the weeks leading up to the event and grew to include harassment from a local far-right biker club, the “Panhandle Patriots.”

There, again, the FBI was monitoring the far-right ecosystem targeting the event. An Idaho Falls criminal intelligence analyst wrote to colleagues that the FBI had shared a tip that “Panhandle Patriot Club threatened to physically assault individuals taking part in the pride parade in Idaho Falls on 6/25/2022,” with one member allegedly saying “If gays want a war, we’ll give them a war.” (The Panhandle Patriots opted not to show up and confront NIPA’s “Pride in the Park” event).

It’s unclear just how much time and attention the FBI has spent monitoring Patriot Front, either in Idaho or elsewhere. But it does give an indication of the breadth of the Bureau’s monitoring of white nationalist groups. “They are actively providing information to local law enforcement so they can intercede to ensure the health and safety of others,” Renato Mariotti, a former federal prosecutor, told Rolling Stone.

“This is not unusual, Mariotti added. “When I would conduct long-term investigations of criminal organizations, I would frequently direct federal law enforcement and agents I was working with to tip off local police departments, if we came across information that there may be a serious danger to the health or safety of others. Oftentimes, we would not tell the departments how exactly we came across this information, but we would do this even if we were investigating a different crime or conducting a separate long-term investigation.”