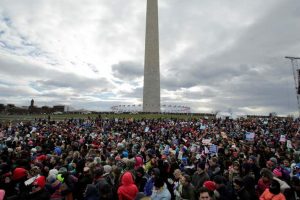 The 49th annual March for Life marks the anniversary of Roe v. Wade

Support for toppling Roe v. Wade is at a new high, according to a Fox News poll of registered voters released Friday, yet twice as many voters still want it to stand.

On the eve of the 49th anniversary of Roe v. Wade, 31 percent want to see the Supreme Court overturn the landmark abortion case, up slightly from 28 percent in September.

This comes as the Supreme Court heard oral arguments in December on a Mississippi abortion law mostly prohibiting the procedure after 15 weeks of pregnancy, a challenge to the decades-old Roe case. A ruling is expected later this year.

Sixty-three percent prefer to let the landmark case stand, down slightly from 65 percent four months ago.  Almost half of Republicans want the case to stand (48 percent) along with about seven in ten Democrats (72 percent) and independents (73 percent). 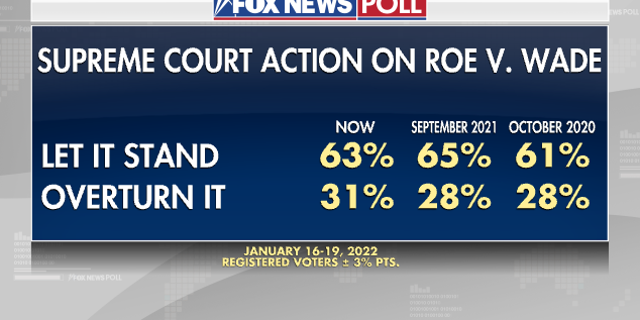 Asked about abortion overall, 52 percent of voters think abortion should be legal in all (29 percent) or most cases (23 percent), while 47 percent think it should only be legal in some cases such as rape, incest, or to save the life of the mother (36 percent) — or not at all (11 percent).  In September, it split 49-49 percent. 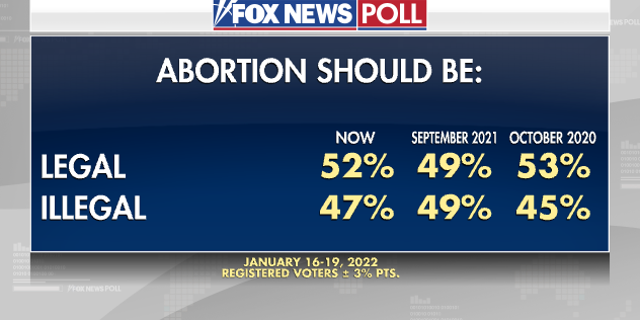 There is an expected partisan divide with majorities of Democrats saying abortion should be legal and majorities of Republicans saying illegal.  Independents split.

When it comes to making changes to the high court itself, a record 46 percent of voters support expanding the number of justices — up from 35 percent last April.

Just over half disagree with increasing the size of the court (51 percent). 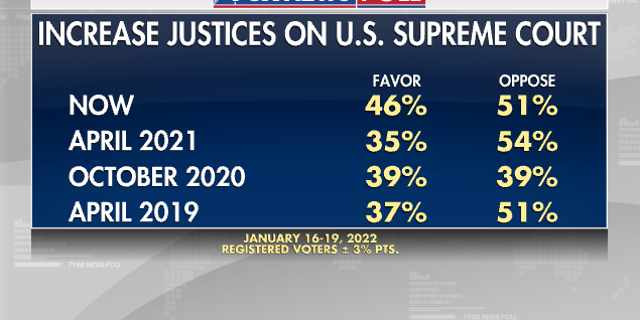 A sizable majority, 69 percent, favor imposing a mandatory retirement age for justices.  Democrats (79 percent favor) are more likely than Republicans (60 percent) to support such a measure. 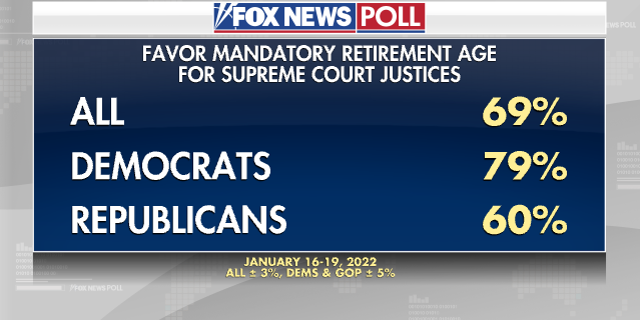 As a whole, a majority of 57 percent feels the court is doing a competent job, including majorities of Democrats, Republicans, and independents. Thirty-eight percent disagree. 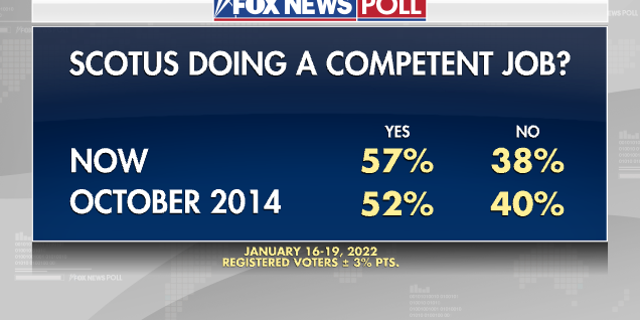 Conducted January 16-19, 2022 by Fox News under the joint direction of Beacon Research (D) and Shaw & Company Research (R), this poll includes interviews among 1,001 registered voters nationwide randomly selected from a national voter file and spoke with live interviewers on both landlines and cellphones. The total sample has a margin of sampling error of plus or minus three percentage points.