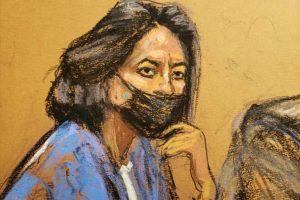 The trial of Ghislaine Maxwell began Monday with a federal prosecutor telling jurors that the British socialite targeted a 14-year-old girl who was one of several girls to be sexually abused by disgraced financier Jeffrey Epstein after Maxwell manipulated them, according to various reports.

Testimony of at least one witness may be heard later Monday after opening statements are completed.

Maxwell's federal trial comes almost 17 months after her arrest in New Hampshire, and more than two years after the 66-year-old Epstein killed himself in a Manhattan jail while awaiting his own trial on federal child sex trafficking charges.

Maxwell, who has been held without bail since her arrest, has pleaded not guilty in the case, where she is charged with conspiracy to entice and coerce minors to travel to engage in illegal sex acts, sex trafficking and other charges.

"I have not committed any crime," the 59-year-old said at a Nov. 1 court hearing.

The jury for the trial was seated Monday morning, shortly before opening statements began in U.S. District Court in Manhattan.

Eighteen jurors were picked for the case. Twelve of them will deliberate on a verdict; the six others will be alternates.

Epstein, who was worth hundreds of millions of dollars, socialized along with Maxwell with high-profile people including former Presidents Donald Trump and Bill Clinton and Britain's Prince Andrew before Epstein pleaded guilty to a sex crime involving a minor in Florida in 2008.

Maxwell's trial is expected to last six weeks or so.

This trial will deal only with the sex-related charges against Maxwell. She will be tried separately for perjury charges stemming from allegations that she lied under oath while being deposed in a civil lawsuit by an Epstein accuser.