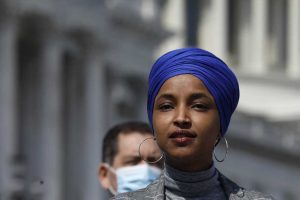 Murphy responded to Rep. Ilhan Omar’s post about the death of Capitol Police Officer William Evans, who was fatally injured in a car-ramming attack near the Capitol building. “Heartbroken to learn another CP was killed while protecting the Capitol. My thoughts and prayers go out to the officer’s family and the entire Capitol Police force,” Omar tweeted on the day of the incident, adding, “The death toll would have been worse if the assailant had an AR-15 instead of a knife.”

On Saturday, Murphy used 9/11 in a racist reply to the Muslim congresswoman, writing in a tweet, “Would have been worse @Ilhan if they had been flying planes into the buildings also.”

Trump and Pence Demand Trust, Then Lie, Blaming Soleimani For Benghazi and 9/11

GOP Candidate Who Called For Rep. Omar to Be Hanged Is Banned From Twitter

'Silence of the Lambs': 'It Broke All the Rules'

Murphy has since deleted the Islamophobic tweet, but WITN in North Carolina captured a screencap. 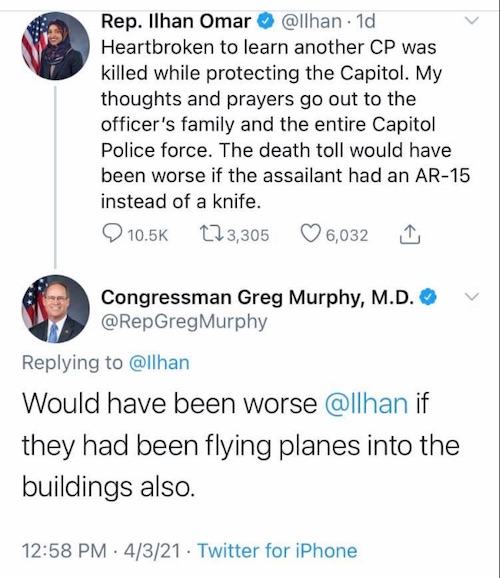 “You just invoked Sept. 11 to attack a Muslim member of Congress. I knew you a little when you were in the state legislature. This is well beneath you. It doesn’t matter how strongly you disagree with her on policy, you should represent our state better than this, @RepGregMurphy,” Jackson wrote.

WITN also noted that this isn’t the first time Murphy let his racist hair down on Twitter before scurrying back and deleting his noxious thoughts. During the 2020 presidential campaign, the congressman wrote, “@KamalaHarris is a walking disaster…she was only picked for her color and her race…is that how we pick our leaders now in America?? QT @Mike_Pence”

Robert S. McCaw, director of government affairs for the Council on Islamic Relations (CAIR) condemned Murphy, saying in a statement, “CAIR strongly condemns Representative Murphy for invoking the September 11th terror attacks while insulting a member of Congress who is Muslim. It is disrespectful to the victims of the 9/11 attacks, to their families and to the countless Muslim and other minority hate crime victims who were targeted in the wake of 9/11. His bigoted comments only serve to perpetuate the climate of hate that we are witnessing nationwide.”

U.S. hate crimes have recently spiked. And the U.S. is currently experiencing a significant increase in anti-Asian hate crimes, with numbers rising by almost 150 percent since the pandemic began.

“One may disagree with a colleague without resorting to racism, Islamophobia or any other form of bigotry,” McCaw said. “We hope Representative Murphy’s Republican colleagues will condemn this Islamophobic attack and not just look the other way as they did when Muslim members of Congress were attacked similarly in the past.”