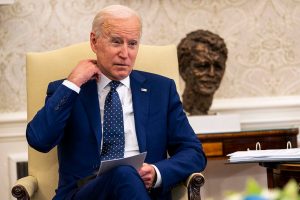 President Biden is not yet satisfied with the Republican offer on infrastructure after another session, this one by phone, with Sen. Shelley Capito on Friday, White House press secretary Jen Psaki said.

Psaki said that the West Virginia Republican, the lead Senate GOP negotiator,  had presented a new offer with a $50 billion increase.

“The President expressed his gratitude for her effort and goodwill but also indicated that the current offer did not meet his objectives to grow the economy, tackle the climate crisis, and create new jobs,” the press secretary said in a statement. “He indicated to Senator Capito that he would continue to engage a number of Senators in both parties in the hopes of achieving a more substantial package. They agreed to speak again on Monday.”

Republicans had initially proposed $568 billion in spending for infrastructure as the White House proposed $2.25 trillion. The White House came down to $1.7 trillion and Republicans came up to $928 billion, and differences still remained in how to pay for the proposal.

Biden had previously proposed paying for the new infrastructure spending by raising corporate tax rates from 21% to 28%, which was a red line for Republicans. But he’s since abandoned those plans and proposed instead a 15% minimum tax for corporations paying very little.

Republicans had also proposed using repurposed Covid funds to pay for much of their bill, but the White House said there weren’t nearly enough funds that hadn’t been spent to do so.

Biden has signaled he wants a bipartisan compromise on infrastructure, especially since he campaigned on his ability to work with Republicans and draw upon his decades of relationships in the Senate. But the Biden administration has also indicated it won’t wait indefinitely for Republicans to agree before trying to go it alone through a budget process that would let him bypass the 60-vote filibuster and only require Democratic support.