Home » Politics » Gun safety advocates are frustrated with Biden after infrastructure jumps the line. Here's what they're telling the White House it can do to tackle gun safety.

Gun safety advocates are frustrated with Biden after infrastructure jumps the line. Here's what they're telling the White House it can do to tackle gun safety. 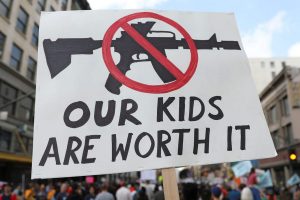 But the closely-knit community that has seen its issue recede from the nation’s front pages following every mass shooting now says it feels frustrated and disappointed with the new Democratic president.

That’s because Biden just sidestepped gun control in favor of infrastructure as his next major policy initiative, even in the wake of recent deadly mass shootings in Atlanta and Boulder, Colorado.

Biden’s messages have certainly been mixed. During his Thursday press conference, the president explained how his next moves on gun control were “a matter of timing” before quickly pivoting to infrastructure. He said that two days after pledging he didn’t need to “wait another minute, let alone an hour,” to take action on guns.

Some advocates remain hopeful that Biden ultimately will tackle the gun issue via executive actions and push for community-based violence-intervention program funding, perhaps even in the multi-trillion dollar infrastructure package that he’s calling on Congress to turn into law.

But they don’t want to wait either.

“There was definitely a lot of hurt and frustration” after the March 25 press conference, particularly among young people who may have preferred more progressive Democratic primary candidates in 2020 but still rallied to elect Biden over President Donald Trump, said Alexis Confer, executive director of March for Our Lives.

“Young people showed up in major ways in the middle of a pandemic and then to hear the issue deprioritized in a way that felt, not to have any sense of urgency, it’s really frustrating,” Confer added.

‘Walk and chew gum at the same time’

Biden scored a big win with the March passage of his $1.9 trillion COVID relief package. Now he’s eager to move to his next massive proposals that aim to spend trillions on infrastructure and on childcare, healthcare, and education.

As for gun control, Democrats are well aware it will be harder to move legislation through an evenly-divided Senate where 60 votes is required to overcome the threat of a filibuster.

There’s no dispute the president has a long record on gun violence prevention. He also continues to say he is committed to the issue and has urged the Senate to immediately pass measures to close background-check loopholes that passed the House and to ban “assault weapons.”

On Sunday, Biden responded to reporters “sure I am” when asked whether he was prepared to personally call Republicans and lobby them to get background check legislation passed in the Senate.

“Everybody keeps wondering whether I cared about dealing with rational gun control,” he said.  “The only gun control legislation ever passed was mine. It’s going to happen again.”

But gun violence prevention advocates have been growing impatient. And that’s even before Biden’s first official White House news conference as president. Brady, Giffords, and the Community Justice Action Fund were among 35 groups that released a joint statement just before the president took reporters’ questions last Thursday calling on him to personally meet with gun reform groups and articulate a comprehensive plan for reforms.

They want a “suite” of executive actions, investments in communities most impacted by everyday gun violence, the appointment of a Bureau of Alcohol, Tobacco, Firearms and Explosives director who will oversee the gun industry and “an aggressive plan to engage Congress” on guns, the letter says.

“We are puzzled by the lack of urgency, particularly when he has shown so much empathy towards the families who have been most impacted by gun violence and after running on the strongest gun safety platform,” Po Murray, chair of the Newtown Action Alliance, said during an online news conference on Friday.

Kris Brown, president of the Brady gun violence prevention group, told Insider “We can walk and chew gum at the same time. We can move forward with an infrastructure bill…and spend time talking about this issue as the public health crisis it is.”

Ticking down to Biden’s 100-day mark

A new ABC News/Ipsos poll found 62% of Democrats approved of Biden’s handling of gun violence. That’s well below the 89% who gave the president high marks on addressing US economic recovery.

Biden will hit the 100-day mark for his presidency at the end of April, and the inaction on guns is frustrating, said Greg Jackson, advocacy director for the Community Justice Action Fund.

Jackson’s group is part of a coalition calling for a $5.3 billion investment in community-based violence-intervention programs, a priority in urban communities where guns are already on the streets.

Biden proposed $900 million for such programs during his presidential campaign. In an interview, Jackson suggested as one possibility including the funds in the administration’s request to Congress for an infrastructure package.

“A lot of those programs we’re advocating for directly connect with jobs, with health services, with COVID outreach, with a lot of the intersecting issues that are already being weaved into the infrastructure package,” Jackson said.

Models that have proven effective include a therapeutic approach for those most at risk, hospital-based violence intervention programs, programs that improve quality of life within communities most impacted by violence and direct survivor support services, he said.

Mike McBride, director for the LIVE FREE Campaign with Faith in Action, said he is “encouraged” that Biden will follow through on his commitments to invest in measures to fight community violence. Black and brown voters won Biden the White House and Democrats the Congress, he said, and they must deal with the issue of violence disproportionately impacting those communities.

“The political intractability around gun control cannot paralyze our work around gun violence prevention,” he told Insider. “There may be other ways to at least get to the lion’s share of gun related shootings and homicides that happen in this country. And that should be just as much a priority as the responses to these mass shootings.”

Community violence intervention funding would be a “great step,” Confer said, adding “I think we’d like to continue to build on that.”

White House press secretary Jen Psaki on Friday said there will be more executive action and other efforts to move forward in the weeks ahead, whether on legislation or supporting gun control measures in the states.

The frustration of anti-gun violence groups should be directed at members of Congress who oppose measures that Biden supports, she said. “We’d certainly support their advocacy in that regard,” she said.

Everytown and its grassroots organization Moms Demand Action did not sign the March 25 letter sent by other advocacy groups. They are working with the White House and expect executive actions soon, while also focusing on the Senate with a seven-figure ad campaign and grassroots mobilization effort urging the chamber to pass background check legislation.

“This is the moment to act,” said Shannon Watts, Founder of Moms Demand Action, in a statement. “We expect executive action from this administration and we expect it soon –– including critical actions to expand background check laws to cover more gun sellers, eliminate the market for untraceable ghost guns, and dramatically increase funding to combat skyrocketing city gun violence.”