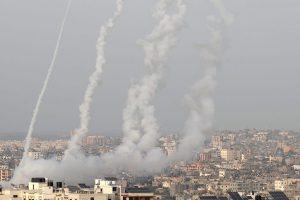 JERUSALEM (Reuters) -Hamas said it fired rockets at Israel on Monday, triggering warning sirens in Jerusalem and near the Gaza border, in an apparent response by the militant group to the injury of more than 300 Palestinians in clashes with Israeli police outside al Aqsa mosque.

Hamas, an Islamist group that controls the Gaza Strip, had given Israel an ultimatum to stand down its forces at al Aqsa and another Jerusalem flashpoint by 6 p.m.

Minutes after the deadline passed, sirens blared in Jerusalem and several explosions were heard. Hamas claimed responsibility, and there were no immediate reports of damage or casualties.

After Hamas, which last fought a war with Israel in 2014, issued the ultimatum, Israel’s military announced it was suspending for a day a major exercise, citing possible “escalation scenarios”.

Earlier, as Israel marked the anniversary of its capture of parts of Jerusalem in the 1967 Middle East war, police fired tear gas, stun grenades and rubber bullets at hundreds of Palestinians who hurled rocks at them at al Aqsa. The violence had died down by the time Hamas issued the ultimatum.

The Palestinian Red Crescent Society said at least 305 Palestinians were injured, and 228 of them were taken to hospital, in the skirmishes at al Aqsa, situated in a compound holy to Muslims, Jews and Christians. It said several were in critical condition. Police said 21 officers were injured.

Recent clashes in Jerusalem have raised international concern about wider conflict, and the White House called on Israel to ensure calm during “Jerusalem Day.”