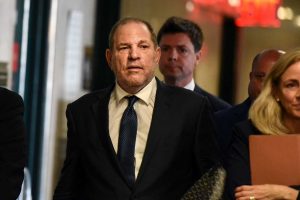 Lawyers for film producer Harvey Weinstein on Monday filed an appeal of his conviction for rape and another sex crime.

Weinstein, 69, was convicted in February 2020 after a trial in Manhattan Supreme Court.

He is serving a 23-year prison sentence in the case, which was tried two years after explosive allegations of sexual misconduct by Weinstein ignited the #MeToo movement that has continued to derail the careers of other high-profile men to this day.

His lawyers in a court filing laid out seven grounds for overturning the conviction of the producer of films such as "Pulp Fiction," "Shakespeare in Love," and "Gangs of New York."

They include the claim that Weinstein was denied his right to be tried by an impartial jury when the trial judge denied his challenge to bar a prospective juror who had written an autobiographical book about "the predations of older men against younger women, and who lied about the substance of the book during" jury selection.

Defense lawyers also argued that Weinstein was denied his right to a fair trial because jurors were allowed to hear claims of serious sexual misconduct by him that were not the subject of the specific charges he faces, and that defense experts were improperly barred from testifying on the subject of memory of sexual events.

And, the lawyers argued, Weinstein received "a sentence that was harsh and excessive."

The appeal is filed in the Appellate Division in Manhattan Supreme Court.

"We have filed a 166-page brief, outlining several serious mistakes made during the course of the trial," Weinstein's appellate lawyer Barry Kamins said in a statement to CNBC.

"We are confident that the Appellate Division will find these issues serious enough to require a reversal of the conviction," Kamins said.

During the trial, jurors heard testimony from the actress Annabella Sciorra, who said that Weinstein had raped her in her Manhattan apartment in 1993.

Weinstein was not charged with raping Sciorra, but her testimony, along with that of five other women, was allowed by the tried judge in order to let prosecutors to show a pattern of predatory conduct by the movie mogul. Scores of other women have accused Weinstein of sexual misconduct.

Another lawyer for Weinstein, Arthur Aidala, said, "With a year behind us and emotions subsided, the transcript of the case confirms what we always believed: that Mr. Weinstein did not receive a fair trial."

"We will argue that the trial judge disregarded well accepted and fundamental principles of New York law and violated Mr. Weinstein's constitutional rights," Aidala said. "We have the utmost confidence that the Appellate Division will correct these mistakes and send this case back before a different judge."

In addition to the New York case, Weinstein also faces pending charges filed in January 2020 by the Los Angeles district attorney's office, which accuses him of raping one woman and sexually assaulting a second woman over a two-day period in 2013.

The Los Angeles DA has a pending extradition request for Weinstein, who is being held in a New York state prison. Weinstein, who has multiple health problems, tested positive for the coronavirus in March 2020 while in prison.