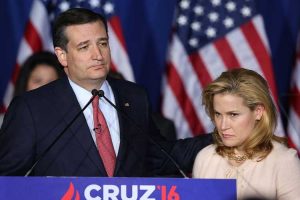 Sen. Ted Cruz said Tuesday his wife, Heidi Cruz, was none too pleased that some of her text messages were leaked to reporters amid the family's much-criticized Mexican vacation during last week's deadly winter weather in Texas.

"I will say Heidi's pretty pissed at that," Cruz, 50, said about his wife, 48, on an episode of the political podcast Ruthless.

Heidi's messages in a neighborhood group chat were first sent to Reform Austin, a local news outlet, amid last Thursday's backlash against the Texas senator's short-lived trip to Cancún, Mexico. National news outlets soon retrieved them as well. (The source, or sources, have not been revealed.)

The texts — which show Heidi complaining about the "FREEZING" temperatures and discussing the family's decision to fly to Cancún — were sent to the press as her husband was trying to explain why he took the trip as his home state was grappling with widespread power and heat shortages.

Last week's winter weather, which pummeled Texas and other parts of the U.S., has been linked to some 70 deaths, according to the Associated Press, including more than a dozen who died in their homes after losing heat.

The senator quickly returned home to Houston after flying to Cancún on Wednesday night, though his family is believed to have stayed for the remainder of their trip.

Cruz blasted the leakers as "a——-" during his podcast appearance.

"Here's a suggestion: just don't be a——-," he said. "Like, just, you know, treat each other as human beings have some degree, some modicum of respect." After a prolonged silence last week while photos of him at the airport circulated on social media, Cruz initially said he was flying to Mexico to — he implied — drop off his young daughters, whom he said had requested the trip.

Heidi's texts, however, showed it was a family affair and she invited others as she also asked if the group chat members all had enough heat.

In her messages, she suggested the trip was an escape from the distressing weather in Texas.

Cruz later admitted he had planned to stay in Cancún through the weekend but said he was going to work remotely from the famed beach retreat.

"Whether the decision to go was tone-deaf — look, it was obviously a mistake," he told reporters after arriving home Thursday, with protesters gathered outside. "In hindsight, I wouldn't've done it."

Cruz's vacation was mocked by critics from Rep. Alexandria Ocasio-Cortez to country singer Kacey Musgraves. (Some defenders argued, however, that Cruz was not directly responsible for Texas' emergency response so he should be allowed to travel.)

Cruz was photographed this weekend handing out water to Texas and has reiterated his commitment to the state in his media appearances, though critics called the moves face-saving hypocrisy.

On Tuesday, Cruz laughed off the backlash he faced saying, "I haven't had this much negative press coverage since Northern California in the 1960s," in a reference to internet memes joking that he is the Zodiac killer. The Texas senator — who again faced calls from Democratic critics to resign after last week's vacation — also brushed off complaints about his family's decision to leave their dog Snowflake behind when they went to Mexico.

"Of all the ridiculous stories," Cruz said. "Look, I love Snowflake. He was home with a dog sitter and actually the heat and power was back on."

Cruz called a local reporter "creepy" for going to his neighborhood to inquire about whether Cruz had power and then taking a photo of the family's dog, whom the journalist saw through the front door.

The Texas senator said it was "even more creepy" that Heidi was photographed on the beach by paparazzi during the Cancún trip.

Cruz said leaks are "a sign of how ridiculously politicized and nasty" people can be and said his wife "was over at a neighbors house" on Monday, indicating she had confronted them about the leaked texts.

Overall, Cruz attributed the fallout over his trip to political differences, even as he was blasted by some last week as "an enemy to our state" for leaving during the crisis.

"We just need to laugh a little bit and loosen up," he said.