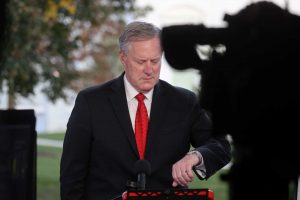 The House plans to vote Tuesday on a measure to hold former President Donald Trump's White House chief of staff Mark Meadows in criminal contempt of Congress over his defiance of a subpoena issued by the select committee investigating the Jan. 6 Capitol riot.

The measure, if passed, would refer Meadows to the Department of Justice for possible criminal prosecution.

The contempt proceedings advanced through the House days after the committee said Meadows refused to sit for a deposition to answer questions about Trump's actions on Jan. 6, when hundreds of his supporters violently stormed the Capitol. The rioters, many of whom were spurred by Trump's false claims of a "rigged" 2020 election, forced lawmakers to flee their chambers and temporarily stalled the confirmation of President Joe Biden's Electoral College victory.

"I have no great desire to be here seeking consideration of this contempt referral," said select committee Chairman Bennie Thompson, D-Miss., during a Rules Committee hearing on Tuesday morning. Thompson noted that Meadows served as a member of Congress for seven years before becoming Trump's chief of staff.

"But that doesn't excuse his behavior," Thompson added. "We've been more than fair. He's brought this situation on himself."

Instead of fully cooperating with the Jan. 6 probe, Meadows last week filed a lawsuit to invalidate two of the select committee's subpoenas, citing Trump's assertion that Meadows' testimony is protected by executive privilege. The committee rejected that claim, and Biden has declined to invoke privilege over documents sought by the investigators.

But before backing out of the deposition, Meadows handed over thousands of records that are not covered by executive privilege, the committee said. Lawmakers said Meadows has no basis to refuse a subpoena to answer questions about those records.

They include texts Meadows received from Donald Trump Jr., Fox News hosts and Republican lawmakers panicking about the Capitol riot as it unfolded.

"We need an Oval Office address. He has to lead now. It has gone too far and gotten out of hand," Trump Jr. texted Meadows in a message revealed Monday night by select committee Vice Chair Liz Cheney, R-Wyo.

"He's got to condemn this s— ASAP. The Capitol Police tweet is not enough," Trump Jr. wrote in another message, according to Cheney.

"I'm pushing it hard. I agree," Meadows responded in a message shared by Cheney.

"Mark, the president needs to tell people in the Capitol to go home. This is hurting all of us. He is destroying his legacy," Fox host Laura Ingraham texted Meadows, according to Cheney.

"Please get him on TV. Destroying everything you have accomplished," Brian Kilmeade of "Fox & Friends" said in another message revealed by Cheney.

"Can he make a statement? Ask people to leave the Capitol," urged Sean Hannity, according to Cheney.

Cheney, who spoke before the nine-member committee voted unanimously for a report recommending contempt charges against Meadows, said the texts showed Trump's "supreme dereliction of duty" in taking no action for 187 minutes after the attack began.

The texts themselves leave "no doubt" that the White House knew about the violent riot taking place at the Capitol as the chaos unfolded, Cheney said.

"It is really bad up here on the hill," one text said. "The president needs to stop this ASAP," read another.

Meadows' legal complaint says that Trump's instruction for him not to comply with the subpoena has put the former chief of staff in the "untenable position of choosing between conflicting privilege claims" put forward by Trump and Biden.

Trump has sued to block the National Archives from sending a slew of White House records to the Jan. 6 committee. He argues that the records are protected by executive privilege. Biden, however, waived privilege over those documents.

The House already voted to hold former White House senior advisor Steve Bannon in contempt for his own noncompliance with a subpoena issued by the Jan. 6 panel. A federal grand jury then charged Bannon with two counts of contempt of Congress.

Bannon has pleaded not guilty. If convicted, he faces a maximum sentence of one year in jail and a fine of up to $100,000 for each count. A federal judge set a tentative July 18 start date for Bannon's trial.

Last week, the select committee voted to advance contempt proceedings for ex-Justice Department official Jeffrey Clark. The investigators also gave him a time extension to comply with the probe.

This is developing news. Please check back for updates.