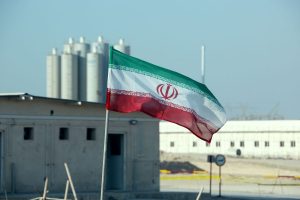 The report quoted a statement from Iran’s nuclear department that asked the International Atomic Energy Agency to avoid publishing details on Iran’s nuclear program that may cause confusion.

“It is expected the international atomic energy agency avoid providing unnecessary details and prevent paving ground for misunderstanding” in the international community, the statement said. It did not elaborate.

On Saturday, Germany, France and Britain pressed Iran to back off its plan to develop uranium metal, calling it “the latest planned violation” of its 2015 nuclear deal with world powers. The goal of the deal is to prevent Iran from developing a nuclear bomb, something Iran insists it does not want to do.

“Iran has no credible civilian use for uranium metal,” they said in a joint statement. “The production of uranium metal has potentially grave military implications.”

On Thursday, the IAEA said Iran had informed it that it had begun installing equipment for the production of uranium metal. It said Tehran maintains its plans to conduct research and development on uranium metal production are part of its “declared aim to design an improved type of fuel.”

Iran reacted to the European statement Sunday saying Iran informed the U.N. nuclear watchdog nearly two decades ago of its plans for the “peaceful and conventional” production of uranium metal. It also said it provided updated information to the agency two years ago about its plans to produce silicide advanced fuel.

The statement said uranium metal is an “intermediate product” in the manufacture of uranium silicide, a fuel used in nuclear reactors that is safer and has more power capability than uranium oxide-based fuel, which Iran currently produces.

The three European nations alongside the U.S., Russia and China signed the 2015 nuclear deal with Iran that prohibited research and production of uranium metal.

President Donald Trump in 2018 unilaterally withdrew the U.S. from Iran’s nuclear deal, in which Tehran had agreed to limit its uranium enrichment in exchange for the lifting of economic sanctions. After the U.S. then ramped up sanctions, Iran gradually and publicly abandoned the deal’s limits on its nuclear development.

President-elect Joe Biden, who was vice president when the deal was signed during the Obama administration, has said he hopes to return the U.S. to the deal.