Home » Politics » Jeff Bezos was criticized for his space flight. See what the billionaire had to say

Jeff Bezos was criticized for his space flight. See what the billionaire had to say 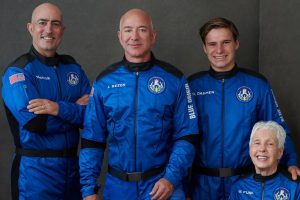 (CNN Business)A version of this article first appeared in the “Reliable Sources” newsletter. You can sign up for free right here.

Jeff Bezos, a/k/a the “richest human being in the universe,” is about to leave Earth for a few spectacular minutes.

It’s going to be one heck of a television and streaming show.

On Tuesday, 52 years to the day of the Apollo 11 moon landing, Blue Origin will launch its first crewed flight of the New Shepard. The company’s live stream is expected to begin at 7:30am ET, with liftoff at 9am, and a landing back on Earth 11 minutes later. All the major networks and websites will carry the launch live. Jackie Wattles, who covers space for CNN Business, has a how-to-watch guide here, including a minute-by-minute breakdown of the important moments.
It’s “a big step for future space tourism,” CNN’s Anderson Cooper said, and “a remarkable step in a mission that began more than two decades ago when Jeff Bezos founded Blue Origin.” Cooper anchored “AC360” from the launch location on Monday.

Bezos is no longer media-shy

I asked CNN innovation and space correspondent Rachel Crane about the media scene in Van Horn, Texas. Here’s what she told me:
“Blue Origin has been resistant to media since the start and has always been very controlled with its public image. So to have any kind of access with Blue is significant, let alone several days’ worth of media opportunities after years of no major access. On Sunday, CNN and others had a chance to go out to the launch pad where New Shepard will lift off. We then ventured inside the New Shepard simulator and spoke with Ariane Cornell, the head of Astronaut Sales. On Monday, Bezos and crew did a round robin of network morning shows and TV correspondents were invited again behind the gates at Launch Site One TV to do live hits a few miles away from the launch pad. Jeff Bezos and brother Mark even delivered dinner to the media on site.”
Here is Crane’s video of the chicken drop-off — you can hear her asking, “Is that your last meal?,” which led Bezos to joke around with the press corps…

Earlier in the day, during an interview that aired on “New Day,” Crane asked Bezos, “There have been a chorus of critics saying that these flights to space are, you know, just joyrides for the wealthy, and that you should be spending your time and your money and energy trying to solve problems here on Earth. So what do you say to those critics?”
Bezos didn’t tap dance around the question: He said, “Well, I say they’re largely right. We have to do both. You know, we have lots of problems here and now on Earth and we need to work on those, and we always need to look to the future. We’ve always done that as a species, as a civilization. We have to do both.” He said this mission is about “building a road to space for the next generations to do amazing things there, and those amazing things will solve problems here on Earth.”

The Washington Post, owned by Bezos, happens to employ one of the best space reporters in the US, Christian Davenport. He had a little fun and tweeted out a selfie from outside an astronaut dressing room on Monday night.
The Post has some special coverage planned for the launch: In partnership with Discovery, it will air a live show, “Space Launch LIVE: Blue Origin & Jeff Bezos Go To Space,” on its website and on the Discovery and Science Channels starting at 8am ET Tuesday. Libby Casey and Chris Jacobs will anchor from the Post’s studio in DC, with contributions from Davenport and others. It will re-air in primetime on TV. The outlets previously produced joint coverage of SpaceX’s first crewed mission, so this is not a first due to Bezos…
Source: Read Full Article