Jenna Bush Hager Emotional After Capitol Riots: 'I Kissed My Grandfather Goodbye in That Rotunda' 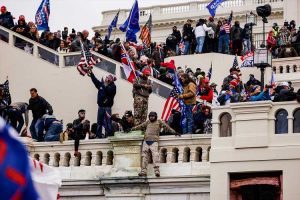 The morning after the violent rioting at the U.S. Capitol, Jenna Bush Hager reflected on the unrest that took place while appearing on Today with Hoda & Jenna.

While speaking with co-host Hoda Kotb, the daughter of former President George W. Bush became emotional as she told viewers: "This is not the America that I know."

The mother of three also recalled her own memories of spending time at the Capitol, including mourning the death of her late grandfather, former President George H.W. Bush.

"I have had the privilege of standing on those steps, in several inaugurations, not just for family members, but for the first Black president of the United States of America, when I was a teacher, in inner-city D.C., and that meant so much to so many," Bush Hager said. "I kissed my grandfather goodbye in that rotunda. I have felt the majesty of our country in those walls and nobody can take that from any of us."

On Wednesday, the same day the House and Senate were in session to certify President-elect Joe Biden's victory in the Electoral College, President Donald Trump addressed thousands of his supporters in a speech that was filled with baseless claims of election fraud. What followed were violent riots and marches through the Capitol's halls and chambers along with Trump supporters waving banners and flags emblazoned with the president's name.

Four people have died, including a woman who was shot inside the Capitol, and more than a dozen police officers were injured.

"I think part of what hurts, and I heard from a friend that's a writer, is that we feel like we're helpless maybe in this moment but we're not because the casual cruelty from the internet and words that do not reflect our country. We can stop that," Bush Hager said on Thursday. "We can share kindness, and smiles, and love, and we can take back what is our country that we all love so very, very much."

The former first daughter concluded, "I have optimism. I see you, seeing people I love, I have to say I want to hug so many people today. That's a hardship. But seeing people that represent the good, spotlighting them. Like we have an opportunity. And I think, I have faith that our country will be better."

On Wednesday, Bush Hager's parents, including former First Lady Laura Bush, released a statement in reaction to the Capitol rioting.

In the statement provided to PEOPLE, the former president, 74, said, "Laura and I are watching the scenes of mayhem unfolding at the seat of our Nation’s government in disbelief and dismay. It is a sickening and heartbreaking sight. This is how election results are disputed in a banana republic — not our democratic republic. I am appalled by the reckless behavior of some political leaders since the election and by the lack of respect shown today for our institutions, our traditions, and our law enforcement."

In addition, other former presidents including Barack Obama, Bill Clinton, and Jimmy Carter have also spoken out about the violence at the Capitol.

"History will rightly remember today’s violence at the Capitol, incited by a sitting president who has continued to baselessly lie about the outcome of a lawful election, as a moment of great dishonor and shame for our nation. But we’d be kidding ourselves if we treated it as a total surprise," Obama, 59, said in a statement.

Trump's predecessor also took aim at the current president and his supporters' baseless claims of election fraud, saying, "For two months now, a political party and its accompanying media ecosystem has too often been unwilling to tell their followers the truth — that this was not a particularly close election and that President-elect Biden will be inaugurated on January 20. Their fantasy narrative has spiraled further and further from reality, and it builds upon years of sown resentments. Now we’re seeing the consequences, whipped up into a violent crescendo."