The Tense Politics of a Texas Abortion Law

Both the left and right want to politicize the courts.

President Joe Biden has long pledged to “build back better” but in the last few months it has become clear that his transformative plans go beyond mere infrastructure and extend to our very structure of government.

From abortions to elections to rents, Biden is seeking to federalize huge areas to displace state law. Not since John Adams and his Federalist Party has the country faced such a fundamental challenge to our system of federalism.

Some of the claims made by Biden recently would make even Adams blush. What is most striking about these claims is that Biden and his aides have indicated that they know they are operating outside of constitutional limits.

Take the recent controversy over the vaccine mandate. Biden and aides like chief of staff Ronald Klain claimed before the inauguration that he would impose national mandates in the pandemic, only to be told that a president lacks such authority over the states. Biden, Speaker Nancy Pelosi, D-Calif., and other Democratic leaders then denied that they would impose such mandates, often acknowledging the constitutional limits placed on presidents.

Then came last week, when Biden suddenly announced that he would impose a national vaccine mandate through the Occupational Safety and Health Administration (OSHA). Klain admitted that the OSHA rule was a mere “workaround” of the constitutional limit imposed on the federal government. White House press secretary Jen Psaki preferred to call it a “pathway” after admitting “we do not have the power to inform each American you need to be vaccinated.”

Whether a “workaround” or a “pathway,” the move would allow the federal government to dictate public health measures in every state – a claim that will face major federalism challenges in court.

Under this interpretation, OSHA could impose a federal mandate for any measure that impacts workers, including public health measures not directly linked to a given workplace or job. That may be more of a sticker shock for some on the federal bench, including some justices.

Garland announced that the federal government would appear in court not as an amicus (or friend of the court), as has been its practice in past cases. Instead, it will sue directly as a party in interest because the law is viewed as countermanding a constitutional right. Indeed, Garland claimed such authority in defense of any constitutional right that could be abridged by any state law.

In his remarks, Garland indicated that the government would claim federal preemption in whole or in part over the abortion area. That is another sweeping claim that could make many judges uneasy. The Supreme Court has always recognized state authority in this area. The question is where to draw the line. The filing will add a new basis for pro-life challenges based on federalization.

The filing against the Texas law followed a call from Biden for a “whole of government response” that was obviously directed at the Justice Department. It is not the first pressure exerted by the White House on agencies for such legal claims.

The Democratic Party has now emerged as the new Federalist Party and Biden is seeking to outdo John Adams in supplanting state authority.

Previously, Biden called for the Centers for Disease Control and Prevention (CDC) to impose a nationwide moratorium on the eviction of renters. Biden admitted that his White House counsel and their preferred legal experts told him that the move was likely unconstitutional. Despite that overwhelming opinion, he listened to Professor Laurence Tribe at the urging of Pelosi. Despite the pledge to return to a respect for the “rule of law,” Biden openly suggested that they could use the litigation to get as much money out of the door as possible before being barred by the courts. They lost in court, as many of us predicted, but Biden wanted this small agency to effectively dictate rental payments across the country.

These moves follow new evidence that the Biden administration had concluded that a farm debt law was unconstitutional before putting it into the pandemic relief bill. 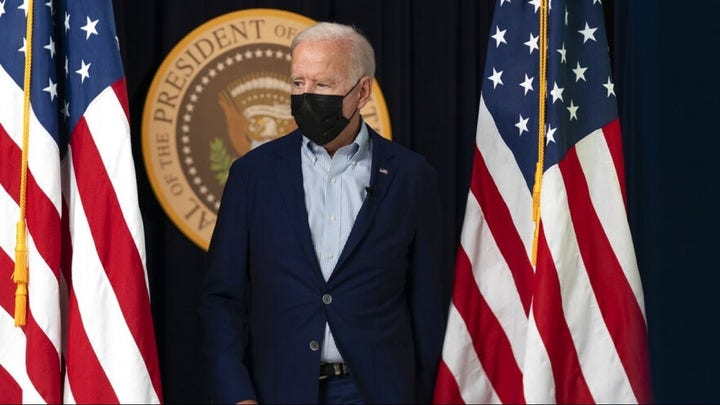 There has been little media attention to the impressive litany of losses of the Biden administration in court or the open pressure by the White House on these agencies. The media covered such pressure extensively during the Trump administration and legal experts objected that the Trump White House was attacking the independence of the Justice Department and other agencies. In these measures, Biden is demanding dubious federal actions that are being promptly taken by his agency heads with poor outcomes for the executive branch.

The move on abortion is particularly reckless. The Texas law is already being challenged so there is no need for a federal action. However, the White House wanted such a filing for political reasons and Garland relented. In so doing, he risked potentially damaging new precedent on federal jurisdiction in a lawsuit that is redundant and unnecessary.

Roughly 200 years ago, the Federalist Party faded from political dominance in the United States and, with it, his vision for a dominant federal government. The Democratic Party has now emerged as the new Federalist Party and Biden is seeking to outdo Adams in supplanting state authority. It is not an act of building back as much as breaking down a system designed to protect liberty by preventing the concentration of authority in our government.

The question now is whether this “workaround” the Constitution will actually work with the courts.