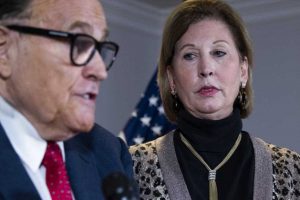 A skeptical-sounding judge on Tuesday questioned lawyers for Fox News, Rudy Giuliani and Sidney Powell about a series of election-fraud claims at the center of a $2.7 billion defamation lawsuit filed against them by voting technology firm Smartmatic.

The company, which only provided services to Los Angeles County in the 2020 election, accuses the defendants of spreading the false story that it rigged the race against former President Donald Trump.

In virtual oral arguments on Fox's bid to have the case dropped, Manhattan Supreme Court Judge David Cohen pressed counsel for the conservative news outlet about specific claims made on its air by current and former hosts Maria Bartiromo, Jeanine Pirro and Lou Dobbs.

"How is that not defamatory?" Cohen at one point asked Fox attorney Paul Clement after referencing a claim from Dobbs in mid-November that Smartmatic had been banned in Texas. The company had not been banned in the state.

Clement responded that that particular claim had been made in the context of a conversation with Giuliani, at the time a lawyer for Trump, who alleged nefarious links between Smartmatic and another company, Dominion Voting Systems.

Smartmatic and Dominion are independent firms that have no connection, the companies say. Dominion has also filed defamation lawsuits against Fox, Giuliani and Powell, among others who spread vote-rigging claims and other conspiracy theories following President Joe Biden's win over Trump.

Clement argued in the hearing that the claims made on Fox, by its hosts or Trump's legal team, do not rise to the legal standard of defamation and are protected by the First Amendment. He also noted that guests like Powell and Giuliani were newsworthy figures discussing the biggest story of the day.

But attorneys for Smartmatic pushed back, saying the defendants made assertions of fact, not opinion, about the voting tech company, and that they do not have "blanket immunity" to spread defamatory content.

They also took issue with Clement's argument that Dobbs' show, which was cancelled in February, is primarily considered opinion programming and that the claims made on it are "more likely to be construed as opinions" for that reason.

Smartmatic lawyer Erik Connolly said in response that Dobbs "did everything that he could to reinforce the notion that he and his guests were providing concrete facts to the audience."

Howard Kleinhendler, an attorney for Powell, argued in the hearing that Smartmatic lacked standing, or grounds to sue her, because the Texas-based Powell didn't make any of her disputed claims from New York.

Cohen then asked Kleinhendler to explain the basis for a slew of Powell's claims involving Smartmatic, including that it flipped "millions" of votes and that its company handbook explains how to wipe away votes. Kleinhendler was unable to respond to some of the claims presented to him by the judge.

Powell was cut loose from Trump's legal team after a press conference in which she claimed Dominion was part of a Communist election-rigging conspiracy involving Venezuela and Cuba. Powell hyped her own efforts as the "Kraken," the release of which would tip the scales in the election.

In the hearing Tuesday, Connolly told Cohen that Powell's false election claims, and her posturing as an "avenging angel" who would reverse Biden's win, were all part of a fundraising effort that raised millions of dollars.

"It's an advertisement for her," Connolly said of Powell's five appearances on Fox. He alleges she framed herself in those appearances as a "champion" of the lie that Smartmatic rigged the election, before directing viewers to her website to give donations.

"The defamation and the fundraising go hand in hand," Connolly said.

Joseph Sibley, a lawyer for Giuliani, argued in the hearing that the former New York City mayor's claims about Smartmatic amounted to "product disparagement," not defamation.