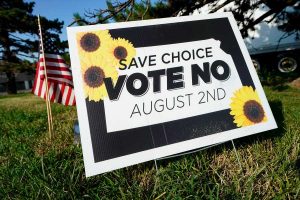 Kansans voted to toss out a ballot measure that would have amended the state constitution to implement a vast slew of abortion restrictions by a margin of just over 63% in Tuesday’s primary.

As of now, abortion is legal in Kansas up to 22 weeks of gestation, protected under a state constitution amendment that guarantees the “right of personal autonomy, which includes the ability to control one’s own body.” The ballot measure, which was drafted by Republicans, is the first post-Roe instance of a state allowing voters to weigh in on abortion legislation.

Advocates are concerned that the measure was placed in the midterm ballot in order to take advantage of skewed primary turnout that favors Republicans. Others pointed out that the language of the referendum and it’s presentation on the ballot made it difficult for voters to make an accurately informed decision.

Can Kansas Cling to Abortion Rights?

'Silence of the Lambs': The Complete Buffalo Bill Story

Kansas voters received an unsigned misleading text message on Monday urging them to vote “YES” on the amendment that “will give women a choice.” Abortion rights activists pointed out that the message misinformed potential voters, as voting “yes” on the amendment would amend the constitution to repeal the current protections on abortion rights. According to The Washington Post the phone numbers that sent the texts were linked to Alliance Forge, a campaign communications company. David Espinosa, chief executive of Alliance Force told the Post that “Alliance Forge did not consult on this message’s messaging strategy or content.”

The Kansas Governmental Ethics Commission indicated that “​​nothing in the [Campaign Finance] Act addresses the use of misleading advertising.”

Tensions over access to reproductive care have been at a boiling point since the overturn of Roe in June. Republicans in Kansas have already vowed to outlaw abortion in anticipation of the constitutional amendment passing, relying of the state legislatures Republican supermajority. Kansas’ attorney general issued an opinion indicating that the passage of the amendment would not impact health care providers’ ability to treat ectopic pregnancies, despite Kansas women already encountering barriers to care.

The end of Roe left states scrambling to make sense of a patchwork of abortion laws and restrictions, with some states working to implement blanket bans on abortion, or codify legal protections for abortion care. The sudden shift in reproductive care’s legal framework across the country is already inflicting harm on those in need of abortion care, including doctors denying care to women in medical emergencies for fear of legal repercussion.