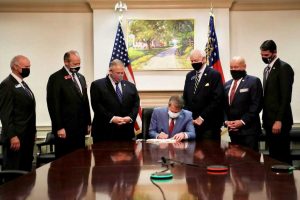 Business executives across the United States are calling out efforts to restrict voting access after Georgia Gov. Brian Kemp signed a law that opponents say would disproportionately disenfranchise people of color.

Among the overhaul of state elections, the bill includes a restriction on drop boxes, makes it a crime to provide food or water to voters lined up outside polling stations, requires mandatory proof of identity for absentee voting and creates greater legislative control over how elections are run.

The bill is one of many Republican-backed election efforts introduced across the U.S. after former President Donald Trump and other GOP members falsely claimed that last year's election defeat was due to fraud. Supporters say the law was needed to restore confidence in Georgia's elections.

For Georgia, it comes after historic turnout in the state's election, particularly among Black voters and voters of color, in the November general election and the January runoff that saw two Democrats defeat incumbent Republican senators.

CNBC compiled a list of corporate responses to the bill:

In a statement Wednesday to CNBC, Kemp defended the law and specifically took aim at Delta's chief executive.

"Today's statement by Delta CEO Ed Bastian stands in stark contrast to our conversations with the company, ignores the content of the new law and unfortunately continues to spread the same false attacks being repeated by partisan activists," the Republican governor said.

"Mr. Bastian should compare voting laws in Georgia — which include no-excuse absentee balloting, online voter registration, 17 days of early voting with an additional two optional Sundays, and automatic voter registration when obtaining a driver's license — with other states Delta Airlines operates in," he added.