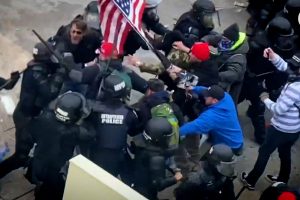 WASHINGTON – A Marine Corps officer was arrested Thursday and charged with assaulting police officers at the Jan. 6 attack on the Capitol, making him the first service member on active duty charged for his role in the deadly riot, the Justice Department said.

Maj. Christopher Warnagiris is accused of forcing his way inside the Capitol on Jan. 6 by pushing through a line of officers guarding the building’s East Rotunda doors. Video footage showed Warnagiris pushing a Capitol Police officer who tried to close the doors, the Justice Department said.

Warnagiris, 40, who’s stationed at the Marine Corps Base in Quantico, Va., is facing several charges, including assaulting, resisting or impeding officers, obstruction of law enforcement, and obstruction of justice. He is among several dozen people with ties to the military who are facing charges related to Jan. 6. The Justice Department said it has charged four guardsmen and reservists and about 40 veterans.

The U.S. Marine Corps, which confirmed Warnagiris is on active duty, said: “The Marine Corps is clear on this: There is no place for racial hatred or extremism in the Marine Corps. Our strength is derived from the individual excellence of every Marine regardless of background. Bigotry and racial extremism run contrary to our core values.”

Capitol attack: Capitol riot spurred conspiracy charge against 31 suspects, but how hard is it to prove?

Hundreds of supporters of former President Donald Trump, some of whom carried Confederate flags and chanted for the death of Vice President Mike Pence, stormed the Capitol on Jan. 6, disrupting Congress as it counted state-certified Electoral College votes. The breach was a culmination of weeks of resentment fueled by Trump’s false claims that the election had been stolen.

The Justice Department has so far charged about 440 people in connection to the Capitol breach. More than 125 were accused of assaulting police officers. These numbers are expected to grow.

Testifying before a Senate committee Wednesday, Attorney General Merrick Garland described the assault on the Capitol as a “fundamental” effort to interfere in a peaceful transfer of power between administrations and said prosecuting those involved is a high priority for the Justice Department.

“I think it is fair to say that in my career as a judge and in law enforcement, I have not seen a more dangerous threat to democracy than the invasion of the Capitol,” Garland told senators.

Warnagiris was scheduled to appear in court Thursday afternoon. It was not immediately clear if he has an attorney.