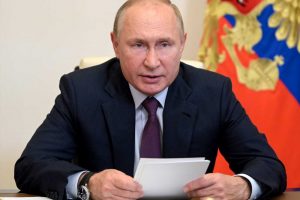 The same journalism organization that leaked the Panama Papers has uncovered a new trove of 11.9 million documents, dubbed the Pandora Papers, that contain explosive details about how global elites and billionaires hide their assets. Revelations from the leak included that a woman who gave birth to a child reportedly fathered by Russian President Vladimir Putin came to own a $4.1 million Monaco apartment and that Jordan’s King Abdullah II has bought $106 million worth of luxury properties around the world held by shell companies.

The document leak contains confidential memos, emails, stock certificates, compliance reports and more. It was obtained by the International Consortium of Investigative Journalists, and the organization described the leak as “unprecedented.” The trove of documents was so large that ICIJ partnered with media outlets — The Washington Post, BBC, and The Guardian — to help comb through it all. The leak contained confidential information on more than 100 billionaires in addition to celebrities, 35 current and former world leaders and 300 public officials.

According to the Post, Svetlana Krivonogikh, who was reported at the time to be in a secret long-term relationship with Putin according to Russian media outlet Proekt, was named as the “beneficial owner” of a luxury apartment in Monaco worth millions via an offshore company. That company was formed soon after she gave birth to a girl. The Kremlin denied the relationship when Proekt reported it, and the media outlet is now banned in Russia, but the documents raise questions about how Krivonogikh became the property’s “beneficial owner,” meaning even if her name is not on official registration documents, she controls or benefits from the asset. The documents further reveal how Russian oligarchs fuel corruption and hide their assets in offshore accounts.

The leak also showed that King Abdullah II of Jordan bought luxury properties in Malibu, Calif., Washington, D.C., and the United Kingdom, over the course of approximately 10 years. During that time the Arab Spring took place, and Jordanians took to the streets in 2011 to protest for a more democratic government and reduced powers for the monarchy. Abdullah ultimately spent $106 million on real estate, the Post reported, and the properties are all held by shell companies registered to himself. Abdullah’s representatives have denied that he used any funds improperly, the Post said.

The papers also included offshore dealings by the presidents of Ukraine, Kenya and Ecuador, the prime minister of the Czech Republic and former British Prime Minister Tony Blair. In addition to politicians and global leaders, some celebrities were caught up in the leak, including pop star Shakira and supermodel Claudia Schiffer. In statements their representatives sent to ICIJ, both denied any wrongdoing.