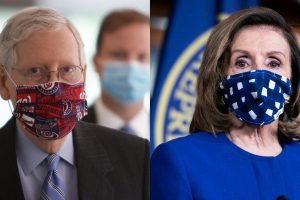 Top Senate Republican Mitch McConnell shut down House Speaker Nancy Pelosi’s idea to have the late Justice Ruth Bader Ginsburg lie in state at the Capitol Rotunda last fall, according to an excerpt from a forthcoming book about Pelosi reported by Punchbowl News.

Read more: We spoke with 21 of Matt Gaetz’s high-school classmates. Some say they could have predicted the congressman’s sex scandal.

After Ginsburg’s death from cancer in September 2020, Pelosi suggested that the justice, a trailblazer for women’s rights under the law and women in the legal profession, should lie in state in the Capitol Rotunda. She would have been the first woman in US history to receive the honor.

Former President William Howard Taft lay in the state in the Rotunda after serving as both chief justice of the Supreme Court and president.

Four Capitol Police officers who were killed in the line of duty (two in 1998 and two in 2021), the Reverend Billy Graham, and civil rights activist Rosa Parks have lain in honor in the Capitol Rotunda.

As Punchbowl noted, Justice Ginsburg ended up lying in state in Statuary Hall on the House side of the Capitol, not under the Rotunda.

The book sheds further light on the frosty relationship between the two power players, who have forged reputations for keeping their respective caucuses firmly in line and being shrewd, tactical legislators during their decades in Congress.

“Mitch McConnell is not a force for good in our country,” Pelosi told Page. “He is an enabler of some of the worst stuff, and an instigator of some of it on his own.”

Page’s book also says that Pelosi calls McConnell “Moscow Mitch” because “she knows it gets under his skin,” Punchbowl reported.

McConnell, for his part, has eagerly embraced other nicknames political rivals have given him, including “Darth Vader” and “the Grim Reaper” of the Senate.

“Madam Speaker” will be released from Twelve Books on April 20.