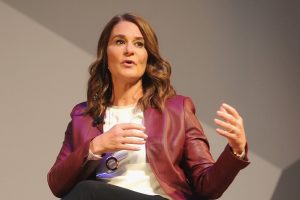 Melinda Gates, co-chairman of the Bill & Melinda Gates Foundation, has called on the U.S. to expand access to paid family medical leave across the nation, citing the impact that the global health crisis and the economic downturn have had on women.

In an interview that aired on CNBC on Monday, Gates said the Covid-19 pandemic pulled the curtain on the caregiving crisis in America.

"In building back, and in this recovery, one of the things Congress is really going to need to look at is paid family medical leave. It is a long time coming in the United States," she said in a conversation on "Closing Bell." "We're not going to get as robust or as quick of a recovery unless we look at this infrastructure that we've turned away from for too long."

Gates' comments coincide with International Women's Day, a global effort to recognize the achievements of women and the many roles they play in society. While a comprehensive plan is critical for working women, it would also be helpful for fathers and men caring for sick family members.

Paid family medical leave is an insurance program that allows employees to take time off work without missing out on a paycheck. The program can be used by workers to care for newborns or family members who are seriously ill.

A national policy would put America in line with other developed countries that already give the privilege to their citizens. The U.S. is one of the only industrialized nations across the globe without such a policy, according to the World Policy Analysis Center at the University of California, Los Angeles.

Nine states have laws on the books that offer the benefit to residents, though Gates said that is not enough.

Detractors of the idea argue that the program would be a burden for small businesses. Advocates propose, however, that it could be financed through paycheck deductions.

"There are some great policies that have been passed here in the United States state by state, and so it's time we look at this for us as a nation," she said.

While paid leave would be helpful for the general workforce, the impact would be particularly beneficial for women, said Gates, a mother of three and wife of Microsoft co-founder Bill Gates. According to Paid Leave for the United States, a group seeking to advance family leave policies, 1-in-4 mothers in the U.S. return to work less than two weeks after giving birth.

The pandemic, which has led to almost a year of societal restrictions and shutdowns of nonessential businesses, left millions of Americans out of work. The layoffs pushed women, who are leaving the labor force at higher rates than men, into an especially difficult place.

Since February 2020, more than 2 million women have dropped out of the workforce entirely, causing their labor participation rate to fall to proportions not seen since 1988, according to the National Women's Law Center.

Women are more likely to be caregivers to children and other relatives, and paid family leave would help them hold on to their jobs. The program would also provide benefits to men, helping to break caregiver norms in the country, as men are less likely to take family leave, Gates said.

She noted that the $1.9 trillion stimulus bill, which Congress is putting finishing touches on before sending to President Joe Biden, includes money for the child-care sector, but she urged that more be done. She is also encouraged by the record number of women holding seats in Congress, hopeful that their perspectives would have an imprint on discussions.

"Because this caregiving crisis is right here in our faces — you know, women are sandwiched between taking care of young children and the older generation — I think we're finally going to see some action there," Gates said.