Michigan Shows Why Managing The COVID-19 Endgame Is So Hard

Michigan Gov. Gretchen Whitmer responded to her state’s soaring COVID-19 caseloads on Friday by calling for a two-week, voluntary return to more social distancing. “There’s a light at the end of the tunnel,” she said, highlighting the state’s progress at vaccination. “I want to get back to normal as much as everyone.”

The steps are Whitmer’s first major actions since the state became the epicenter of a new COVID-19 wave spreading through parts of the U.S. No state has more people getting sick with the coronavirus every day. Crowded inpatient facilities are forcing hospitals to delay elective surgeries again.

In one desperate tweet on Thursday, Justin Dimick, chairman of the University of Michigan’s surgery department, wrote that his facility was among those starting to postpone procedures: “Bars and restaurants are open. People are out and about. No new restrictions. We need help.”

But while Whitmer urged residents to avoid indoor dining and asked school districts to suspend both in-person high school learning and after-school sports for the two-week period, she declined to issue new orders in either case. It’s a less aggressive move than many public health experts had been urging, even as she faces ongoing, relentless calls from Republicans and their allies to dial back restrictions even more.

It’s not a new situation. Whitmer’s management of the pandemic last year won widespread acclaim and vaulted her onto the national stage. One reason was her determination to champion public health in the face of unrelenting attacks from President Donald Trump and his allies ― not to mention a plot on her life that the FBI said it foiled.

But in January, her secretary of health and human services, Robert Gordon, abruptly resigned on the same day the state began reopening restaurants for in-person dining. Internal emails, which The Detroit News later obtained, showed Gordon was worried the plan went too far, given the threat of new coronavirus variants. Experts including Dr. Anthony Fauci have since said Michigan may have reopened too hastily.

Whitmer, who consults regularly with top health researchers from the state and around the country, has almost certainly heard similar things in private. Friday’s announcement suggests that she is trying to walk a fine line between following public health guidance and recognizing that her constituents, even the politically sympathetic ones, have lost their patience for pandemic restrictions.

Of course, that is precisely the problem now all over the country: Many Americans are ready to move on from the virus, but the pandemic isn’t over just yet. It’s a difficult situation to manage, especially in such a politically polarized environment. But lives are literally at stake.

Why Michigan Is In Trouble

Michigan was among the states where B.117, a British variant, first appeared. It has been spreading quickly among the groups not yet vaccinated, which is mostly younger and more socially active people. It is a big reason for the state’s problems, although not the only one.

“I honestly think it’s a little of everything ― variants, plus increased mobility and reduced precautions on an individual level,” Emily Martin, an infectious disease epidemiologist at the University of Michigan, told HuffPost. “We have really the first large-scale movement of the virus through age groups that we’ve managed to keep relatively protected thus far, which means there are a huge number of susceptible people still to be infected.”

Michigan may also be a victim of its own past success, some researchers have speculated. “Michigan did so well in the last surge that I actually think part of it is that they may just have more vulnerable people and a lower level of population immunity than many other states,” said Ashish Jha, dean of the Brown University School of Public Health.

That success is in no small part thanks to Whitmer, who early in the pandemic scrambled to acquire personal protective gear when it wasn’t coming from the federal government and ordered full shutdowns of activity when it was still controversial to do so.

Detroit was among the first metropolitan areas that the virus hit last year and, for a few weeks, its health care facilities were on the edge of being completely overrun. But the crisis never reached New York City levels, and Michigan similarly avoided the dire numbers of some other places during the second surge of the virus.

Overall, Michigan’s per capita death rate is close to the national average, which represents an accomplishment given Michigan’s exposure early in the pandemic, when medical science was still struggling to understand the virus. But from the get-go, Whitmer faced a sharp backlash from Trump, who didn’t take kindly to her public criticisms of his erratic, frequently indifferent crisis management, as well as from anti-restriction Michiganders, some of whom defied her orders openly.

The critics never represented a majority of Whitmer’s constituents. On the contrary, she has enjoyed majority support throughout the crisis, and her poll numbers actually went up a bit. But the loud, angry protests came awfully close to the kind of violence that hit the U.S. Capitol in January, following the presidential election, and drew from some of the same crowds. 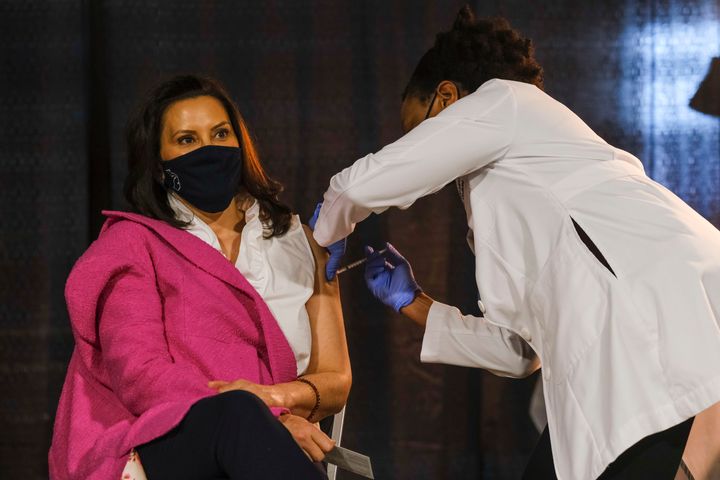 Meanwhile, Republicans have used their gerrymandered control of the Michigan Legislature to undermine Whitmer’s authority. They also sued to strip her of emergency powers. Their victory, at the hands of conservative justices who at the time were a majority on the state Supreme Court, forced her to issue public health orders through the state Department of Health and Human Services, which has its own legal authority.

Why Managing The Pandemic Endgame Is Difficult

That was the context in January, as Michigan’s COVID-19 numbers declined and attention turned to the status of restaurants.

The debate wasn’t about whether to allow diners in restaurants but how many and how soon, according to those emails that reporter Craig Mauger of The Detroit News obtained. Gordon and his team presented a plan to limit tables to six people from one household and 20 people indoors at one time. Restaurants could also have as many as 100 patrons indoors if they added new ventilation and underwent state inspections.

Whitmer instead issued a plan allowing all restaurants to accommodate up to 25% capacity or 100 customers. It also made ventilation and inspections voluntary. (Her administration has further loosened the restrictions since then.)

Once cases started rising, public health experts began urging Whitmer to reintroduce dining restrictions. They have also been lobbying for curbs on high school sports, which epidemiologists have said is another source of spread, although the problem seems to be less the activities themselves than the carpooling and socializing that follow.

“I don’t think that this is a moment to be pretending like indoor dining and sports activities are worth the risk to people, especially considering what we’re seeing with B.117,” Abdul El-Sayed, the former public health director for Detroit, told HuffPost.

In her press conference announcing the voluntary measures on Friday, Whitmer sounded like somebody who understood and largely agreed with that diagnosis but was wary of pushing too far. “It’s less of a policy problem that we have and more of a compliance and variant issue that we are confronting,” she said. “State policy alone won’t change the tide.”

The political resistance Whitmer faces is not difficult to understand. Even as public health experts seek new restrictions, she’s facing calls from Republicans to dial them back. “I am glad the governor encouraged personal responsibility and safety today,” Jason Wentworth, the GOP state House speaker, said in a trollish response to Friday’s announcement. “Now let’s take the next logical step. Let’s remove the remaining restrictions in Michigan.”

Whitmer is also facing a new lawsuit, this one from a group calling itself Let Them Play Michigan. The organization wants state courts to block mandatory COVID-19 testing of teen athletes, even though robust testing would seem like the surest way to keep student athletes healthy and still playing. (Daily testing of athletes is what has allowed professional leagues like the NBA and NFL to carry on their seasons.)

The compliance issues are real, too. Increasingly large numbers of people are ignoring Michigan’s mask mandate, which health experts say is likely another significant cause of spread. “There is a big contribution of behavior,” Martin said. “I was grocery shopping outside of my usual area this weekend, and less than half of people in the store were wearing masks.”

The same thing is happening all over the country, including in other states with rising caseloads. Federal officials such as Dr. Rochelle Walensky, director of the U.S. Centers for Disease Control and Prevention, have pleaded with Americans to stick with social distancing and masking just a little longer.

What Could And Should Happen Now

Whitmer’s other big ask on Friday was for more vaccines from the federal government, which is something she had been urging for days. And she’s not alone. The two senior members of Michigan’s U.S. House delegation, Democrat Debbie Dingell and Republican Fred Upton, sent the Biden administration a formal letter echoing the request.

The administration has responded by saying it would send more testing supplies and vaccinators to the state, but not more vaccines. Jeff Zients, White House COVID-19 coordinator, on Friday cited fairness and uncertainty over which states might soon be seeing new outbreaks. He also said some of the hard-hit states, presumably including Michigan, have surplus supply they could be distributing.

(Independently figuring out how much vaccine states have, and whether they could meaningfully increase administration, remains difficult because of reporting lags and discrepancies between federal and state websites.)

Whatever happens with distribution, vaccines will overtake infections at some point. The question is how many people will become seriously ill or die in the meantime. One model, by research programmer Joshua Schwab at the University of California, Berkeley, predicted that a restaurant pause could reduce deaths by 1,700 and hospitalizations by 16,000, while a vaccine surge to the state could reduce deaths by an additional 1,200 and hospitalizations by 10,000.

“Yes, we need a vaccine surge,” Mona Hanna-Attisha, the Flint pediatrician famous for her role in exposing that city’s lead poisoning crisis, tweeted on Thursday. “But it will take a few weeks to confer immunity. Right now we must restrict indoor activity, mask up & socially distance.”

To longtime public health advocates such as El-Sayed, the most frustrating part is that the warming weather should enable outdoor dining and make social distancing a lot easier than it has been for the last five months. With widespread vaccination now underway, tougher restrictions would need to be only short-term. “The reality is that we don’t need to do this for another year,” El-Sayed said.

El-Sayed has proposed making restrictions mandatory but tying them to vaccination rates, in part to give holdouts more reason to get the shots. Whitmer has not talked about anything along those lines. But on Friday, in her call for voluntary action, she made the same essential argument: that the end of the pandemic is really almost here, and a premature return to normality will have deadly consequences.

“We can’t let up now, not when we’re so close,” Whitmer said. “That’s the nature of this virus: The second we let our guard down, it comes roaring back.”

A HuffPost Guide To Coronavirus