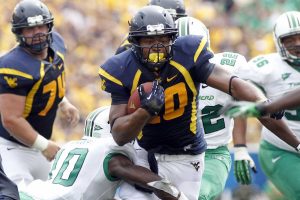 The Supreme Court on Wednesday is set to hear arguments from the National Collegiate Athletic Association in a case over whether the organization can cap education-related benefits paid to college athletes.

The case comes amid a broader debate over compensation for student athletes and in the middle of the NCAA's March Madness basketball tournament, which will hold its women's and men's championship games on Sunday and Monday. Some athletes playing in the games have sought to pressure the organization over its compensation policies, using the hashtag #NotNCAAProperty.

The NCAA has fought to protect the "amateur" quality of its games for years, though it has gradually allowed larger payments to some athletes, including full cost of attendance scholarships since 2015. The NCAA is in the process of reforming its policies to allow athletes to profit from their name, image and likeness, though the effort was delayed earlier this year amid Justice Department scrutiny.

The case is the first one related to the NCAA to make it to the country's highest court since the 1984 case NCAA v. Board of Regents of the University of Oklahoma, in which the justices struck down the organization's plan for televising football games.

Alston v. NCAA, No. 20-512, the case being argued, stems from a challenge brought by Shawne Alston, a running back for the West Virginia Mountaineers, and other student athletes. The athletes have argued that the NCAA's restrictions on education-related benefits — items such as computers, science equipment and musical instruments — violate federal antitrust law.

Since 2015, NCAA policies have allowed Division I athletes to receive grants up to the cost of attendance of their institution that's determined by the school's financial aid office, as well as some payments above that amount, including cash stipends and awards.

At the heart of the student athletes' case is the allegation that the NCAA is acting hypocritically, raking in money while underpaying athletes in the name of "amateurism." In fact, they argue, the NCAA's restrictions on education-related payments are "cost-cutting measures, plain and simple."

"Coaches, assistant coaches, and athletic directors take millions in salaries. Yet the schools have agreed among themselves to limit what student-athletes may receive for their work in generating these extraordinary revenues," Jeffrey Kessler, Alston's attorney, wrote in court papers. "The agreements among these schools represent a classic horizontal restraint of trade — an agreement among competitors to limit how much they will have to expend to compete for talent and labor."

Kessler wrote that the NCAA, its member conferences and schools "receive billions of dollars every year through the hard work, sweat, and sometimes broken bodies of student-athletes."

A federal judge in California sided with the athletes and the 9th U.S. Circuit Court of Appeals affirmed the decision in May. In its decision, the 9th Circuit said that the NCAA was entitled to protect the amateurism of its games, but defined that as "Not paying student-athletes unlimited payments unrelated to education."

The 9th Circuit acknowledged that the Supreme Court, in the 1984 Board of Regents case, had adopted a much stricter definition, which cast amateurism as excluding all payments for athletic performance.

But, the appeals court said, it was fair to drop the "Not One Penny standard" because of "considerable evidence that college sports have retained their distinctive popularity despite an increase in permissible forms of above-COA compensation and benefits."

In its appeal of that decision, the NCAA, represented by former U.S. solicitor general Seth Waxman, argued that the 9th Circuit has gone off the rails and that leaving the decision standing "will fundamentally transform the century-old institution of NCAA sports, blurring the traditional line between college and professional athletes."

Waxman acknowledged the public debate over athlete compensation but said that the lower court had "made itself a tool of one viewpoint in the debate."

The NCAA is also arguing that removing the cap on education-related benefits essentially opens the door to any compensation that can be spun as related to education.

"By permitting such payments for student-athletes' play, the decision will transform student-athletes into professionals, eliminating the procompetitive distinction between college and professional sports," he wrote. "Consumers will likely come to view NCAA athletics as just another form of minor-league sports."

The case will be argued over the phone while the Supreme Court building remains closed because of the Covid-19 pandemic. Arguments will begin at 10 a.m. ET and be streamed live to the public. A decision in the case is expected over the summer.