A leading candidate for Congress released a TV ad on July 1 with a message that is about as uncontroversial as it gets in a Democratic primary: It condemned the gap in pay between men and women who do the same jobs.

“Women are paid less than what men are paid,” the candidate says in the 30-second spot, after highlighting the U.S. women’s national soccer team’s fight for pay parity. “That’s unacceptable.”

Coming from an ordinary Democrat, the TV ad would be unremarkable.

But the candidate in question is former Ohio state Sen. Nina Turner, an ally of Sen. Bernie Sanders (I-Vt.) and famously unfiltered critic of the national Democratic establishment.

Due to the Cleveland-area district’s heavy Democratic bent, the winner of the primary will be the prohibitive favorite against the GOP nominee in November’s special election.

But less than a month before Election Day, Turner is running away with the contest and ads like the one about women’s pay equity are a key reason why. 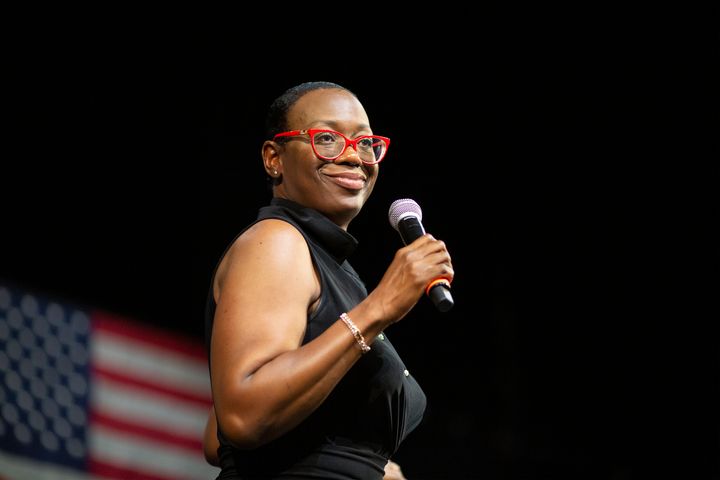 But rather than dwell on the left-moderate divide, she has used those funds to re-introduce herself to voters as a pragmatic public servant who represented them on the Cleveland City Council and in the state Senate.

In addition to the pay equity spot, Turner’s first two TV ads, which aired in early May, highlight her work with then-Ohio Gov. John Kasich (R) on a task force to combat racial profiling in policing in 2014, and describe how her baby grandson inspires her to seek public office. Neither video mentions “Medicare for All,” the single-payer health care policy that Turner has embraced for years (though the policy is a central theme of two of her more recent ads).

In a June 1 interview discussing an internal poll that showed Turner leading Brown 50% to 15%, Turner campaign pollster Ben Tulchin did not deny that Turner’s TV ad campaign seeks to demonstrate her versatility.

“She doesn’t shy away from saying she’s for Medicare for All,” said Tulchin, who also conducted polling for Sanders’ two presidential campaigns. “What Nina brings to the table is she’s got a lot to offer to every voter in the district. She’s not a one-dimensional candidate.”

It doesn’t hurt that Turner’s political career prior to 2016 was far less left-wing than it has become in recent years.

Turner has frequently been behind political reform, even when it meant crossing local Democratic Party bosses. She won praise in 2009 for her support of a winning referendum that streamlined the Cuyahoga County government.

But at the same time, as a state senator, Turner was an outspoken proponent of charter-school-friendly education reforms to the Cleveland public school system in 2012. She has since spoken up in favor of tougher regulation of those schools, but stood by her work on that overhaul effort.

Turner’s work on the Cleveland City Council from 2005 to 2008 and her stint in the state Senate from 2008 to 2014 have won her a number of moderate Democratic allies.

Each of those endorsements speaks to relationships in Ohio politics that predate Turner’s entry into Sanders’ orbit in November 2015. Her work on education reform increased Jackson’s control over the school system; she fought against Kasich’s law curbing union rights alongside Yuko in 2011; and was part of Pepper’s party leadership slate in 2014.

From a tactical perspective, Turner’s efforts to synthesize her new base with her more mainstream past is logical.

The district ― represented by a succession of Democrats with close ties to party leadership ― is something of a stronghold for the Democratic establishment. Sanders received less than one-third of the vote in Ohio’s 11th in 2016 and far less than that in 2020.

What nonetheless makes Turner’s conciliatory campaign posture surprising is that as a surrogate for Sanders in 2016 and 2020, she developed a reputation as a charismatic pugilist for the left who often went further than Sanders himself in her indictments of rival candidates and the Democratic establishment.

“With some progressives, they don’t have that elected experience, so they go all in on the left and they forget to appeal to other parts of the party,” said David Cohen, a political science professor at the University of Akron. “Having been a state senator, she understood how to represent the more progressive constituency, but others in her district as well.”

Partly as a result, Brown, who also chairs the Cuyahoga County Democratic Party, has struggled to slow Turner’s rise.

With less campaign funding than Turner, Brown used her first TV ad to both introduce herself to the public and draw a contrast with Turner. (Normally candidates will use later ads to differentiate themselves — or better yet, rely on outside groups to do the dirty work.)

“In Congress, I’ll bring people together and work with Joe Biden to stop gun violence and provide economic relief for families. That’s different than Nina Turner,” Brown says in the ad.

The ad then shows a TV interview in which the interviewer says to Turner, “You’ve been highly critical of President-elect Joe Biden.”

When Turner responded by calling the spot an “attack” as in a fundraising email, Brown taunted Turner with a tweet, questioning whether she’d changed her tone out of political expediency.

“Is being ‘highly critical’ no longer something Nina is proud of now that she’s trying to win votes?” Brown wrote. 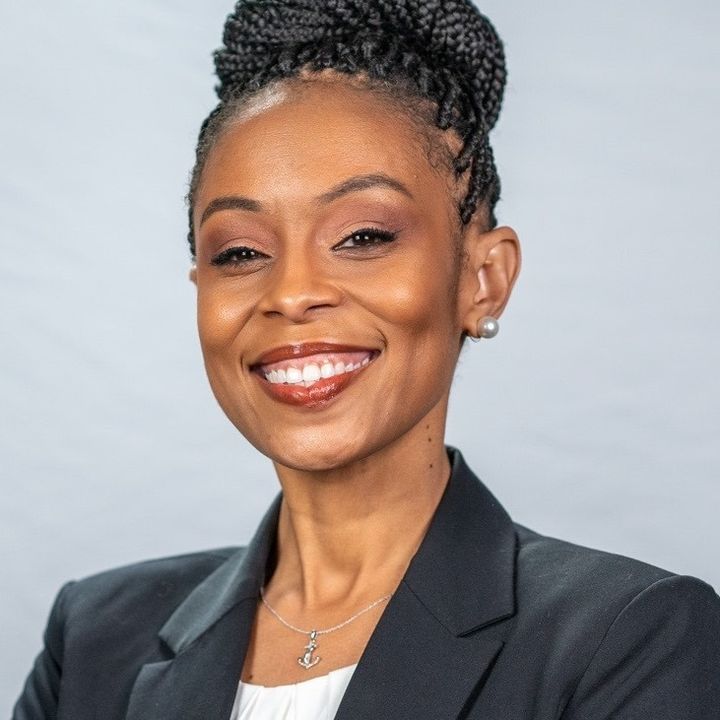 Despite Turner’s fundraising advantage, Brown outspent her on broadcast television ads in the last three weeks of June, according to data obtained by HuffPost. Turner’s campaign did not respond to requests for a response to Brown’s allegations of flip-flopping, or an explanation of the TV spending gap.

But the Democratic Majority for Israel (DMFI), a well-heeled super PAC supporting Brown’s bid, has just a few weeks left to define Turner in a negative light.

DMFI’s first TV ad, which went up on June 30, boosts Brown rather than going after Turner.

Jeff Rusnak, a Democratic consultant in the Cleveland area who supports Brown but is not working for either candidate, thinks that DMFI has made a mistake by failing to define Turner as “an extremist.”

“Running a positive ad is a waste of money for an outside group,” Rusnak said.

DMFI did not respond to a request for comment on the criticism.

A DMFI ad that first aired on Wednesday, however, blasted Turner.

“The country is more polarized than ever ― and Nina Turner is no help,” the narrator says.

The ad seizes on one of Turner’s more controversial comments from the past.

In July 2020, Turner appeared to compare the race between President Donald Trump and then-candidate Biden to presenting people with a choice between eating a “bowl of shit” and “half” a bowl of shit. (Turner told HuffPost that the “colorful comments” were meant as a critique of Democratic Party framing, rather than Biden as a candidate.)

Asked about whether Brown plans to go harder on Turner, the campaign provided a statement that did not dramatically ratchet up the tenor of her rhetoric toward Turner.

“It’s up to other candidates to explain why they opposed and insulted Democratic candidates in general elections — and to apologize for it,” Brown said in the statement. “Personally, I’m proud to be a Democrat and was proud to vote for Hillary Clinton and Joe Biden.”

A recent slip-up by Turner has given Brown’s allies a bit of new hope.

Render said that Clyburn’s failure to extract more concrete concessions from Biden was “incredibly stupid,” to which Turner appeared to respond affirmatively: “You can talk about it,” she said.

Clyburn, the highest-ranking Black member of Congress, endorsed Brown days later. Brown wasted no time featuring him in a new TV ad where he dubbed her the rightful heir to the “legacy” built by former Reps. Lou Stokes, Stephanie Tubbs Jones and Fudge ― all three of whom he served with in Congress.

Clyburn took a subtle dig at Turner in the spot, implying that her penchant for the spotlight would be a problem. Referring to Fudge and her predecessors, Clyburn told voters, “They were effective because they focused on you, not on themselves.”

As moderate Democrats seek to slow Turner’s momentum, Brown has picked up other national endorsements in recent weeks, including former Secretary of State Hillary Clinton and Fudge’s mother. (Fudge, with whom Brown has been close for years, has declined to endorse in the race for fear of violating a law barring Executive Branch officials from using public resources for political purposes.)

But if the Democratic Party wants to make the race a replay of the presidential primaries, Turner’s progressive supporters are content to respond in kind. Turner claims to have raised more than $100,000 in both 24-hour periods after Clinton endorsed Brown and DMFI released its first ad, giving her a total June haul of over $930,000.

And Turner scored a coup of her own in recent days. The editorial board of the Cleveland Plain Dealer endorsed Turner on Sunday, citing a career in Ohio politics that was “practical, not ideological.” The newspaper hit Brown for refusing calls to step down as chair of the Cuyahoga County Democratic Party after launching her campaign and called her “pleasant but undistinguished.”

HuffPost has also learned that Turner’s allies have created a super PAC to counter the influence of DMFI: The Democratic Action PAC, set up by Connor Farrell, a left-wing campaign finance consultant who helped set up Justice Democrats’ super PAC to support Jamaal Bowman in 2020.

The pro-Turner group has not yet had to disclose its fundraising and spending figures, and Farrell would not provide details, but vowed that it would make a mark on the race.

“We are not going to let them just attack Nina Turner without fighting back,” he said.