Home » Politics » No more ‘From The Desk of Donald J. Trump:’ Former president shut down blog launched just a month ago

No more ‘From The Desk of Donald J. Trump:’ Former president shut down blog launched just a month ago 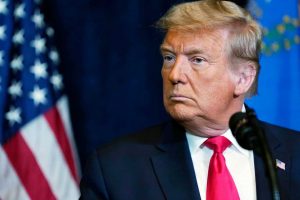 WASHINGTON – “From the Desk of Donald J. Trump” is no longer.

The former president has shut down a blog he created just a month ago, opting instead to post his increasingly frequent written statements on his traditional website, a spokesman said Wednesday.

Trump had used the short-lived blog as an alternative to Twitter, Facebook, and other social media sites that banned him because of his constant false statements about last year’s election loss to President Joe Biden.

Trump spokesman Jason Miller said the blog, entitled “From The Desk of Donald J. Trump,” was designed to be temporary as the organization develops its own social media site.

“It was just auxiliary to the broader efforts we have and are working on,” Miller said.

Miller said he did not know when a new Trump social media platform might launch.

Trump’s written statements, which include falsehoods about alleged “election fraud” and attacks on Biden and anti-Trump Republicans, still appear on the ex-president’s website.

Trump aides announced the blog on May 4, releasing a video that advertised “straight from the desk of Donald J. Trump” and included references to his banning from social media.

Twitter and Facebook banned Trump after his statements in the wake of the Jan. 6 riot at the U.S. Capitol in which his supporters tried to halt the counting of electoral votes that elected Biden.

Trump’s critics relished the demise of the blog.