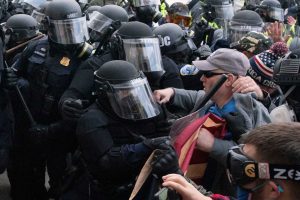 A New York man charged in a vicious assault on a D.C. police officer during the deadly Capitol riot was ordered jailed pending trial, when an angry federal judge Tuesday declared the suspect’s alleged behavior as “just not acceptable.”

Thomas Sibick is accused of ripping the radio and badge from the tactical vest worn by Officer Michael Fanone, who was later pulled into a mob where he was battered and shocked with a stun gun by rioters who attempted to take his service weapon.

After allegedly lying to the FBI multiple times about his involvement in the attack, Sibick last month surrendered Fanone’s mud-smeared badge, which the suspect had allegedly buried in the backyard of his Buffalo home.

“The defendant’s conduct is on video tape,” an incredulous U.S. District Judge Beryl Howell said, referring to Sibick’s actions during the riot. “Such egregious conduct…and no remorse.

Capitol police officers in riot gear push back demonstrators who try to break a door of the U.S. Capitol on Wednesday, Jan. 6, 2021, in Washington. (Photo: Jose Luis Magana, AP)

“His conduct on Jan. 6, to put it bluntly, was lawless,” Howell said.

The judge issued an arrest warrant and ordered that Sibick be transported to Washington where he will be held without bond.