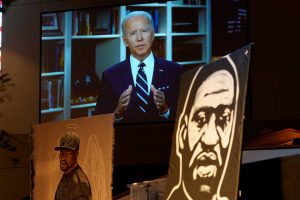 WASHINGTON – One year after the murder of George Floyd under the knee of a Minneapolis police officer sparked international protests for social justice, President Joe Biden hoped to have signed police reform legislation.

But the anniversary of Floyd’s murder has come and will go without lawmakers on Capitol Hill coming to a deal to pass legislation that is named in Floyd’s honor.

While lawmakers in Washington continue to negotiate a package on police reform, the White House has downplayed the delay of legislation being passed by the one-year mark of Floyd’s death, a deadline that Biden himself set. Instead of focusing on the talks, the president will instead commemorate Floyd’s death with his relatives, who will visit the White House Tuesday.

“The president is still very much hopeful that he will be able to sign the George Floyd Justice and Policing Act into law,” White House press secretary Jen Psaki said at a press briefing Monday. “We are of course very closely engaged with the negotiators, while also leaving them room to work.”

Over the past couple of weeks, lawmakers in the Senate have been negotiating the bill named after Floyd, which passed in the House earlier this year. The bill was originally introduced last year by Reps. Karen Bass, D-Calif., and Rep Jerry Nadler, D-N.Y., Sen. Cory Booker, D-N.J., and then-Sen. Kamala Harris.

The bill bans police chokeholds, like the one used on Floyd, bans “no-knock” warrants that police can use to forcibly enter private property, expands the Justice Department’s ability to subpoena police departments for investigations and funding for state attorneys general to investigate police departments and creates a national public registry of police misconduct and abuse.

Ongoing talks on the police reform bill are led by Rep. Karen Bass, D-Calif., and Sens. Cory Booker, D-N.J., and Tim Scott, R-S.C. Negotiations are largely stalled around the issue of whether to end qualified immunity for police officers, which would allow civilians to sue officers for on-duty abuses.

“This anniversary serves as a painful reminder of why we must make meaningful change. While we are still working through our differences on key issues, we continue to make progress toward a compromise and remain optimistic about the prospects of achieving that goal,” the trio of lawmakers said in a joint statement Monday.

In his first joint address to Congress, Biden urged lawmakers to commemorate Floyd’s memory by passing the George Floyd Justice in Policing Act, a large package of police reforms policies, by the anniversary of Floyd’s murder.

“We’ve all seen the knee of injustice on the neck of Black Americans. Now is our opportunity to make some real progress,” Biden said in his address. “The vast majority of men and women wearing a uniform and a badge serve our communities and they serve them honorably. I know they want to help meet this moment, as well.”

Hours after former Minneapolis Police Officer Derek Chauvin was convicted in the killing of Floyd, Biden said “we can’t stop here” and Floyd’s death must “change hearts and minds as well as laws and policies.” On police reform, Biden during his address to Congress last month told lawmakers to “get it done next month, by the first anniversary of George Floyd’s death.”

The White House, however, believes a deal will be reached, and the president still wants to sign the legislation into law “as quickly as possible.”

“We have confidence in the negotiators, and we’ve seen them convey publicly that they feel the vibes are good and they’re continuing to make progress,” Psaki said during a press briefing last week.

Bass told USA TODAY last week that the negotiators are still trying to compromise on qualified immunity and the federal law on abuse of power, which is U.S. Code Title 18, Section 242.

When asked whether the bill would be signed by the summer, Psaki said “the President wants to sign it into law as quickly as possible.”

White House senior adviser Cedric Richmond said Sunday during an interview on MSNBC that “meaningful talks are still going on.”

“It’s better to have a meaningful bill than worry about a deadline,” he said.

Biden meets with the Floyd family

Amid the ongoing negotiations on Capitol Hill, Biden is turning his focus to commemorating Floyd’s memory with his family.

“This is going to be a private meeting,” Psaki said during a Monday press briefing, adding that Biden “wanted this meeting to be private and in order to have a real conversation and preserve that with the family.”

The press secretary noted that Biden maintains a “genuine relationship” with the Floyd family, who he has been in contact with since last summer during his presidential campaign.

Members of Floyd’s family who will be in attendance include Floyd’s seven-year-old daughter Giana and her mother, Roxie Washington; Floyd’s sister, Bridgett; as well as Floyd’s three brothers and nephew.

“The courage and grace of this family, and especially his daughter Giana, has really stuck with the president,” Psaki said.

‘I bring an equilibrium’: Tim Scott steps into the spotlight as he tries to negotiate police reform for Republicans