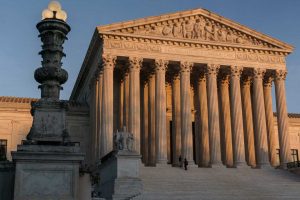 It’s almost Friday, OnPolitics readers. Hope you have less on your plate than the federal government does because today has been another busy day in Washington.

On the home front: House Democrats may have a rhetorical battle on their hands when it comes to expanding the Supreme Court. Plus, a USA TODAY exclusive: The White House is set to announce a plan to offer $39 billion in funds for child care providers under the president’s $1.9 trillion COVID-19 relief package.

On the foreign policy front: The Biden administration has expelled 10 Russian diplomats and imposed a new round of sanctions.

Want this news roundup in your inbox every night? Sign up for OnPolitics newsletter here.

Last Friday, President Joe Biden announced that he is forming a commission to study possible changes at the Supreme Court, responding to a call from liberals to expand the nine-member bench to blunt former President Donald Trump’s impact on the court.

Today, progressive Democrats introduced legislation to expand the Supreme Court to 13 justices. There’s just one-not-insignificant problem: House Speaker Nancy Pelosi said she had no intention of bringing it to the floor.

“I think it’s an idea that should be considered and I think the president’s taking the right approach to have a commission to study such a thing,” Pelosi said.

The legislation to expand the Supreme Court will face an uphill battle on Capitol Hill for two reasons:

A second round of Russia sanctions

What’s going on with Russia? Biden expelled 10 Russian diplomats and sanctioned more than three dozen individuals and companies Thursday in retaliation to a massive cyber hacking of federal agencies and interference in the 2020 presidential election.

This second round of sanctions is aimed at Russian President Vladimir Putin and tougher and more sweeping than the last. It comes five months after the SolarWinds cyber breach in which Russia is accused of hacking the networks of at least nine federal agencies as part of a mission to gather secrets of the U.S.

The actions also are in response to Russia’s efforts to influence the 2020 election by waging disinformation campaigns to help Trump’s candidacy, mirroring meddling efforts in the 2016 election.

But the Biden administration isn’t done yet. It sanctioned six Russian technology companies that provide support to Russia’s cyber program in addition to 32 entities and individuals accused of carrying out Russian government-directed attempts to influence the election. The U.S. also joined with the European Union and other allies to sanction eight other individuals and entities associated with Russia’s ongoing occupation in Crimea.

What else is going on?