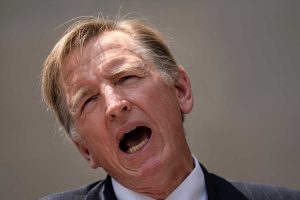 Paul Gosar has repeatedly denounced the American Rescue Plan, a bill passed by Congress earlier this year to help Americans and businesses during the pandemic. Gosar labeled the plan, which cost $1.9 trillion, “a Democrat spending bonanza” and agreed with his colleague Matt Gaetz’s contention that it’s nothing more than “a trojan horse for socialism.” Gosar voted against the plan, of course, but in a Monday press release he happily took credit for a $32,000 American Rescue Plan grant that will help an Arizona airport clean and sanitize its facilities, calling the funds “essential.”

“I am pleased to announce that the City of Kingman will receive this critical funding for economic relief related to operational costs for cleaning and sanitizing the Kingman Airport to combat the spread of COVID-19,” Gosar wrote. “This funding is essential to maintaining safe and reliable air service to the community.”

Included in the release was a quote from Kingman Mayor Jen Miles thanking the Arizona representative for his “continued support.”

“We are grateful for Congressman Gosar’s continued support, and this funding will help with the ever-growing Kingman Municipal Airport operations,” Miles said.

Gosar and Miles’ offices did not immediately respond to a requests for comment from Rolling Stone.

As a refresher, here are some of the initiatives that were funded by the American Rescue Plan: $1,400 stimulus checks, increased child tax credits, extended unemployment insurance, rental assistance, and emergency funds for governments, in addition to funds for businesses. When Gosar voted against the plan, he called it a “supposed Covid relief bill” and claimed that the legislation “fails to compensate small and medium-sized businesses while providing only meager relief for the American people.” Not only did he vote against it, he proposed an amendment to give Americans $10,000 stimulus checks in an attempt to strip a number of other priorities from the bill.

As of Monday, Gosar seems pretty proud of that supposedly “meager relief.”