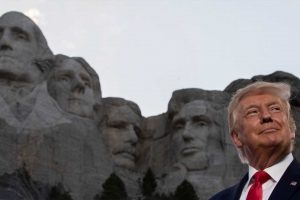 WASHINGTON – The “National Garden of American Heroes” envisioned by former President Donald Trump is no more.

President Joe Biden on Friday revoked a number of his predecessor’s executive orders, including one to create a statuary garden that reflects “the awesome splendor of our country’s timeless exceptionalism.”

Trump had called the garden America’s answer to a “reckless attempt to erase our heroes, values, and entire way of life.”

Biden also got rid of Trump’s requirement that legal immigrants have health insurance.

Biden said it doesn’t benefit the United States to block immigrants who “lack significant financial means or have not purchased health insurance coverage from a restrictive list of qualifying plans.”

The other Trump orders revoked were intended to:

Trump had announced his idea for the “National Garden of American Heroes” during a 2020 speech in front of Mount Rushmore.

His effort to build more statues came as protesters across the U.S. tore down statues in protest of violence against Black people. Among the statues torn down were monuments honoring Robert E. Lee, the Confederate general, and Christopher Columbus.

Trump said protesters were “determined to tear down every statue, symbol, and memory of our national heritage.”

He hoped the garden would be open to the public in time for the 250th anniversary of the Declaration of Independence on July 4, 2026.