The bloc of centrists, led by Rep. Josh Gottheimer (D-N.J.), is threatening to withhold support for the more transformative, $3.5 trillion spending framework if the House does not first pass a $550 billion bipartisan infrastructure bill that has already cleared the Senate.

“Making sure that we have conservative Democratic votes on the budget resolution and reconciliation package before moving their bipartisan infrastructure package across the finish line is the way to make sure that both get through,” said Mary Small, national advocacy director for the Indivisible Project, a progressive advocacy coalition. 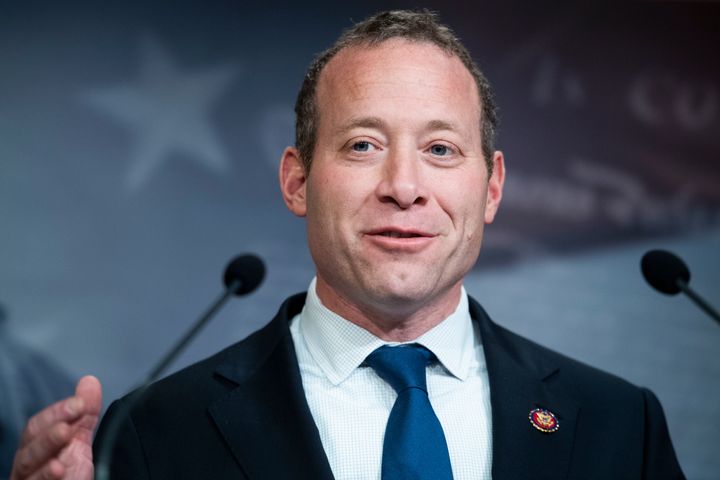 The Indivisible Project is joining with the Working Families Party, the Sunrise Movement and Justice Democrats’ political nonprofit Organizing for Justice to spend more than $100,000 on TV ads in Gottheimer’s district and that of the eight other Democratic holdouts.

In addition, the Green New Deal Network, a coalition of climate-focused activism groups that includes some of the organizations involved in the TV ad buy, is spending more than $75,000 on digital ads targeting the nine Democrats while it also mobilizes its membership to bombard the nine Democrats’ congressional offices with emails and phone calls.

Finally, an even larger universe of groups that includes Our Revolution is participating in in-person actions aimed at the Democrats in question. These groups are sponsoring a demonstration outside of Gottheimer’s district office in Glen Rock, New Jersey, on Tuesday.

The Senate passed the more modest, bipartisan infrastructure package on Aug. 10. But although the Senate has approved Biden’s budget resolution ― a broad spending framework with no actual power ― the House has not.

The resolution’s passage in the House is a prerequisite for the drafting of a suite of spending measures that both legislative chambers would approve through a process known as budget reconciliation. Legislation passed by budget reconciliation requires a simple majority in the Senate, allowing Democrats to circumvent the threat of a Republican filibuster.

The framework that Biden and congressional leaders have laid out for those spending bills, however, suggests that they would be the vehicle for Biden’s most transformative policy achievements.

Biden is also hoping that the reconciliation package will include a scaled-down version of a voting rights bill that the Senate might be able to pass with a simple majority.

Ultimately, Biden will need all 50 Democratic senators to vote in favor of the suite of bills for them to pass. Centrist Sens. Kyrsten Sinema (D-Ariz.) and Joe Manchin (D-W.Va.) have already balked at the $3.5 trillion price tag.

The dispute between progressives and the nine moderate House Democrats over the order of consideration for the bills reflects both their different priorities and a divergent approach to legislative tactics.

Gottheimer and his fellow travelers ― Reps. Carolyn Bourdeaux (Ga.), Ed Case (Hawaii), Jim Costa (Calif.), Henry Cuellar (Texas), Jared Golden (Maine), Vicente Gonzalez (Texas), Kurt Schrader (Ore.) and Filemón Vela (Texas) ― insist that the bipartisan infrastructure bill, rather than the budget resolution and the spending bills it would enable, is in danger if the House does not vote on it first.

“Time kills deals,” the group of House Democrats wrote in an opinion piece in The Washington Post on Sunday night. “This is an old business saying and the essence of why we are pushing to get the bipartisan infrastructure bill through Congress and immediately to President Biden’s desk — as the president himself requested the day after it passed the Senate.”

The centrists have gotten support from No Labels, a group with which Gottheimer is closely aligned that supports bipartisanship as an end in itself. No Labels released a 30-second national TV ad thanking “the unbreakable nine.”

The video, which dubs the group of centrists “real-life heroes,” intersperses clips of the House Democrats speaking with clips of both prominent real-life politicians, such as the late Sen. John McCain (R-Ariz.), and fictional portrayals, such as Daniel Day-Lewis’s rendition of Abraham Lincoln.

But the White House denies that it has demanded an immediate vote on the budget reconciliation package, deferring instead to House Speaker Nancy Pelosi (D-Calif.), who has promised that the House will vote on both bills by Oct 1.

In fact, several senior White House and Biden administration officials have personally called the nine House holdouts to listen to their concerns and urge them to support a House rule setting the stage for a vote on the budget bill, according to someone familiar with those discussions.

It’s not clear why the centrists fear that delay will jeopardize passage of the bipartisan infrastructure bill.

Unlike the budget package, there are no Democrats who have indicated that they will vote against the infrastructure bill in its current form. It is likely to draw some Republican support in the House, as it did in the Senate.

Progressives, by contrast, worry that after passing the bipartisan infrastructure bill, the moderate Democrats, who are already voicing concerns about the $3.5 trillion price tag, will lack the incentive to go along with a sufficiently ambitious budget bill.

“Once you get the bipartisan bill over the finish line, it takes away leverage for progressives to make significant advances,” said Joseph Geevarghese, executive director of Our Revolution.

And though moderates like Gottheimer see the bipartisan infrastructure package as the highest possible priority, progressives find it unobjectionable but fundamentally incomplete.

“A bipartisan bill is the product of compromise ― significantly watered down,” Geevarghese added. “It’s important, but it doesn’t really capture the priorities that President Biden and Sen. Sanders have laid out as important.”

Some progressives have even suggested that they want the House, which has a slightly larger Democratic majority than the Senate, to preserve the option of holding up the infrastructure bill until the Senate takes up the more ambitious budget bill.

In a letter to Pelosi earlier this month, Congressional Progressive Caucus Chairwoman Pramila Jayapal (D-Wash.) and two deputies, Reps. Ilhan Omar (D-Minn.) and Katie Porter (D-Calif.), said that the progressive caucus had the votes to tank the bipartisan infrastructure bill if the Senate did not pass the budget bill. Without naming names, the trio of congresswomen said that a majority of the progressive caucus’s 93 members would vote against the infrastructure bill, according to The New York Times.

This group of progressive lawmakers’ brinkmanship has faced less blowback from Democratic leadership than the centrists’ maneuvers because the progressives can correctly cast themselves as proponents of Biden’s full agenda.

And unlike some progressive causes embraced by the left, the policies in the budget bill are popular with the public. More than 60% of voters in the nine moderate Democrats’ House districts support the budget reconciliation package, according to the progressive polling firm Data for Progress.

As a result, the nine moderate House Democrats have precious little support from even the traditional, centrist leaders of the party. The New Democrat Coalition, a business-friendly group of Democrats, announced its support for an immediate vote on the budget resolution on Friday. Third Way, a centrist think tank, applauded the faction’s statement on Monday.

Still, progressives are claiming that a defeat for the nine moderate Democrats, who are reportedly beginning to fracture, is evidence of the left’s growing power.

“This is about where the center of gravity is within the Democratic Party,” Geevarghese said. “It’s a tug of war and shows the maturation of the progressive movement.”