Home » Rep. Liz Cheney is courageous while Republican men are profiles in cowardice

Rep. Liz Cheney is courageous while Republican men are profiles in cowardice 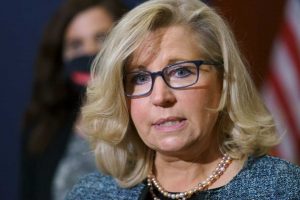 My favorite female politician from history is the late U.S. Sen. Margaret Chase Smith, Republican of Maine. She stood up against the Republican “Boys club” in the 1950s when she condemned and called out another GOP authoritarian, misinformation spreading, smearing, cancel culture warrior, Wisconsin’s Senator Joe Mccarthy.

Fast forward to modern day 2021, and Wyoming Congresswoman Liz Cheney (daughter of our 45th Vice President Dick Cheney) is Smith reborn. Like Smith, she is the lone Republican woman in leadership in a caucus run by grey haired white men. Smith, however, had it much harder though as she was the only woman in the U.S. Senate in 1950, when she became the first member of the Senate to denounce McCarthyism, in what has become known as her “Declaration of Conscience” speech.

In that historic speech Smith stated the basic principles of  what she called “Americanism”:

●      The right of independent thought.

Smith voiced concern publicly that those who exercised such profoundly American beliefs at that time were being labeled as communist or as fascists. Just as now in 2021, Liz Cheney and any other Republicans in the House (10 House Republicans voted to Impeach Donald Trump in 2021) like her who dare criticize Donald Trump or call out his “big lie” on the 2020 Election results are called “RINO’s” “socialists” or “unAmerican” because they do not drink at the trough of Trump.

Just like Senator Smith, Representative Liz Cheney, was one of the first in her party after the Jan. 6, 2021 insurrection incited by former President Donald Trump and justified by over 126 Members of the House Republican Caucus to call Trump out, to condemn him and vote to Impeach him. She has been persona non grata in her right wing, male led, Trump loving caucus.

But here is the question for any sane Republicans who are left:

Minneapolis: In Minneapolis, healing after Chauvin conviction, ‘I hope that the world is watching us’

Is it wise to attack the lone female voice in your leadership caucus? Is it wise to make the daughter of a former vice president, and one of the most conservative political dynasties in modern Republican party history a pariah for not kissing Trump’s ring? And supporting “the message” as Leader McCarthy put it –the message that by the way seems to be as follows:

Trump won the 2020 Election. Joe Biden is not president. Kamala Harris is missing in action on the border crisis. America has no racial baggage. Sixteen nineteen did not happen – slavery needs to be gotten over. American history started in 1776. Jim Crow is over. We had a black president. The police are victims of Antifa and Black Lives Matter. The libs are going to take your steaks, your hamburgers, Mr. Potato Head, and turn America into Venezuela. That is the 2022 GOP platform and message for winning control of the House. The scary thing is: They just might succeed.

Cheney is the profile in courage

In the final analysis, as a woman, as a woman of color, and as a former Republican from 1988-2016, I have seen this movie before. These Republican men do not like, nor do they support mouthy, strong, bold, independent Hillary Clinton-type women – and right now Liz Cheney is not towing the line, she is speaking truth to power and they are going to make her pay with her leadership post. I penned a piece in 2019 titled, “Republican Women Must Save Their Party from Trump.” I see now that if Elise Stefanik is the future of GOP women in the House and Joni Ernst in the U.S. Senate, there is no future for the women in the party.

I have been there. Not as an elected member of Congress, but as a young woman of color staffer, committee counsel, lobbyist who for the past 25 years has been screaming at the wind in op-eds, as a political activist for the GOP to change it’s close minded, small tent rhetoric relative to women and racial minorities. Instead of supporting women like me, they come after you, block you, blackball you. They elevate women who are silent, compliant and who tow the line the boys want them to tow. Just as Speaker Nancy Pelosi shared on Tuesday, May 4 in a statement on the House GOP Leaderships treatment of Cheney.

Good for Liz Cheney, she is rich, and doesn’t need anything from these Trumpthuglican neanderthal men. She is a profile in courage and they are the ultimate profile in cowardice.

Sophia A. Nelson is an adjunct professor at Christopher Newport University in Virginia and the author of “E Pluribus ONE: Reclaiming Our Founders’ Vision for a United America.” Follow her on Twitter: @IAmSophiaNelson