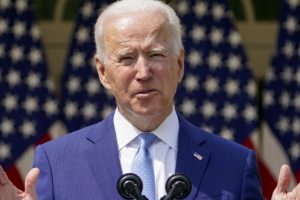 President Biden will address a joint session of Congress on April 28, nearly 100 days after taking office.

The only issue with that date, Rep. Nancy Mace, R-S.C., says, is that no one will be there.

The South Carolina lawmaker ripped Biden on Twitter for deciding to address Congress when most lawmakers will be out of town and working in their home districts.

“President Biden, for his State of the Union, will be addressing an empty room with only special, hand picked members of Congress,” Mace continued. “Despite every member of Congress getting vaccine access in January, and honestly we’re probably the first place in the country with herd immunity, …”

“Basement Biden is back at it again,” she said in her concluding tweet.

White House press secretary Jen Psaki has been pressed during briefings for an explanation as to why Biden was waiting so long to address Congress. Every one of Biden’s predecessors dating back to President Ronald Reagan has delivered his first speech to Congress within his first 40 days in office. Biden will deliver his just before he marks his 100th day in office.

“There is not – it is not a snubbing happening here,” Psaki explained last month. “We are in the middle of a global pandemic, and of course, any joint session speech would look different than the past.”

In her invitation to Biden, Pelosi, D-Calif., hoped that he would share his “vision for addressing the challenges and opportunities of this historic moment.” A few of those challenges he’s expcted to hit will presumably be COVID-19 vaccine distribution, the financial impact of the pandemic, and his recent announcement that he intends to pull troops out of Aghanistan. But viewers will likely also be paying attention to the president’s mental fitness during his first State of the Union, for he struggled in his first solo press conference, losing his train of thought and trailing off at several moments.

Vice President Kamala Harris has not been very visible these days, either. Despite having been appointed as the administration’s point person for helping to solve the crisis on the U.S.-Mexico border, she has yet to hold a press conference about it.