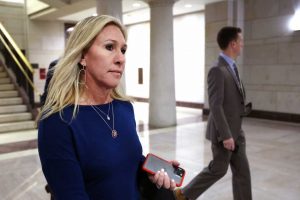 WASHINGTON – Republican congressional leaders sharply condemned Rep. Marjorie Taylor Greene on Tuesday for comparing COVID-19 safety protocols such as mask wearing and vaccinations to actions of the Nazi regime, though they have stopped short of calling for any formal discipline.

The Georgia Republican who has frequently warred with Democrats found herself at odds with GOP leaders Tuesday, including Senate Minority Leader Mitch McConnell of Kentucky and GOP House leader Kevin McCarthy of California, who said comparing the government’s efforts to the Holocaust was out of bounds.

“Marjorie is wrong, and her intentional decision to compare the horrors of the Holocaust with wearing masks is appalling,” McCarthy said in a statement. “The Holocaust is the greatest atrocity committed in history. The fact that this needs to be stated today is deeply troubling.”

“This is one of the frequents outbursts that are absolutely outrageous and reprehensible,” McConnell said at his weekly Capitol Hill news conference Tuesday. “But any punishment I assume would have to be administered by the House.”

“Equating mask wearing and vaccines to the Holocaust belittles the most significant human atrocities ever committed,” tweeted New York Rep. Elise Stefanik, the newly elected chair of the GOP House Conference. “We must all work together to educate our fellow Americans on the unthinkable horrors of the Holocaust. #NeverAgain.”

Several days ago, Greene told the Christian Broadcasting Network’s Water Cooler show that the Democrat-controlled House’s requirement that masks be worn on the floor was reminiscent of the Holocaust, when Nazi Germany systematically exterminated 6 million European Jews. On Tuesday she tweeted that cards to show proof of vaccination were tantamount to the gold stars the Nazis required Jews to wear for identification.

In a series of tweets Tuesday, Greene doubled down on the comparison.

Equating mask wearing and vaccines to the Holocaust belittles the most significant human atrocities ever committed. We must all work together to educate our fellow Americans on the unthinkable horrors of the Holocaust. #NeverAgain

“Vaccinated employees get a vaccination logo just like the Nazi’s forced Jewish people to wear a gold star,” Greene wrote in retweet of a Knoxville, Tennessee, TV station’s story about a supermarket dropping mask requirements for fully vaccinated customers.

Pretty soon it will be..

“We only hire vaccinated people, show your vax papers.”

“We only admit vaccinated students, show your vax papers.”

“These bathrooms are only for vaccinated people, show your vax papers.”

Then..
…scan your bar code or swipe your chip on your arm.

In a tweet later Tuesday morning after blowback from Republicans, Greene downplayed her comments and blamed liberal Democrats.

Greene was referring to a group of four progressive Democratic lawmakers – Reps. Alexandria Ocasio-Cortez of New York, Ilhan Omar of Minnesota, Ayanna Pressley of Massachusetts and Rashida Tlaib of Michigan – who have been outspoken about a number of issues including their criticism of Israeli policy toward the Palestinians.

In February, the House took the unprecedented step of removing Greene from her two committees, saying the stream of inflammatory and menacing social media posts from her before she became a lawmaker was too much to overlook.

The 230-199 vote was almost entirely along party lines, with 11 Republicans joining every other Democrat in voting to unseat her from the Education and Labor Committee and the Budget Committee.

If House lawmakers wanted to take further punishment, they could move to censure her, a form of public humiliation that requires only a simple majority, or expel her, which requires the backing of at least two-thirds of members.